SAN MARCOS – Carolyn Boyd, Shumla Endowed Research Professor in the Department of Anthropology at Texas State University, has received a $145,000 grant from the National Endowment for the Humanities (NEH)  for her project, Origins and Tenacity of Myth, Ritual, and Cosmology in Archaic Period Rock Art of Southwest Texas and Northern Mexico.

The grant is the first one Boyd has received from the NEH.

“We are absolutely thrilled about it,” Boyd said. “It is making a dream come true.”

Accepted under a new NEH category— archaeology and ethnographic field research this project is related to the documentation and interpretation of 4,000-year-old Pecos River style (PRS) rock art in Southwest Texas and Coahuila, Mexico. 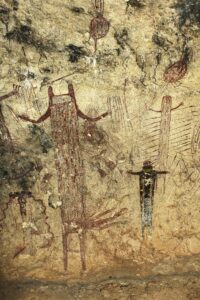 Boyd will work with Texas State graduate students and a team led by Phil Dering from the Shumla Archaeological Research and Education Center. Boyd founded Comstock-based Shumla in 1998. The team will identify and photograph pictographic elements in three PRS murals, conduct digital microscopy of intersecting paint layers to analyze mural stratigraphy, conduct formal analyses to identify the compositional structure of each mural, identify relationships among figures, create written descriptions of the art, create artistic reproductions of each panel, and note observations regarding the artistic process.

“This will allow us to really get in there and document in a level of detail we’ve only done once before. The opportunity that this affords in terms of interpretation is really huge,” Boyd said.

Others working with the team include Stacy Schaefer, professor emerita, Department of Anthropology at California State-Chico; Jim Bauml, retired senior biologist at the Los Angeles Arboretum; and Diana Rolón, who is contracted with Texas State and is currently studying the representation of felines in PRS rock art.

Boyd, Dering, Schaefer and Bauml will travel to the Sierra Madre Occidental mountains in Mexico to share their results with members of the Huichol (Wixáritari) community, whose belief system most closely reflects ancient Mesoamerican cosmological concepts. In prior studies, Boyd has identified strong parallels between the rock art and the myths and beliefs of the Huichol and ancient Aztec. Schaefer and Bauml, who have lived and worked with the Huichol for more than 40 years, will serve as guides and translators to Boyd and Dering. The team will record how Huichol consultants relate the rock art images to their cosmology.

The digital documentation portion of the project will get underway in August. The grant will run through 2024. 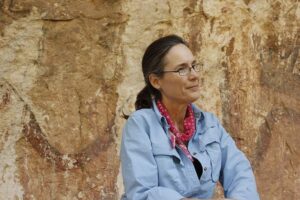 Archaeological fieldwork was severely impacted by the COVID-19 pandemic. Boyd who spent much of 2020 writing, cited her chapter in Ontologies of Rock Art: Images, Relational Approaches and Indigenous Knowledge, titled “Images in the Making: Process and Vivification in Pecos River Style Rock Art.” She is currently working on a paper for Latin American Antiquity titled, “Speech-Breath: Mapping the Multisensory Experience in Pecos River Style Pictography.”

Sections of playscape to close at San Marcos Children’s Park