According to the Austin Police Department,  the U.S. Marshals Lone Star Fugitive Task Force has located missing person Hillary Salcedo. The suspect, Hector Avila, has been taken into custody on an outstanding warrant.

SAN MARCOS — A Texas Amber Alert has been issued statewide for 14-year-old Hillary Salcedo, who was last seen on Jan. 15, 2022, in Buda. Law enforcement officials believe the child is in grave or immediate danger.

According to the Amber Alert issued on Thursday, January 20, Salcedo was last seen at 7:30 p.m. on Saturday in the 700 block of Rolling Hills in the city of Buda. She is described as a 14-year-old Hispanic female with red hair and black eyes. Salcedo is 5-foot-4, weighs 105 pounds, and was last seen wearing a blue jean jacket and a red shirt.

Police have identified and are also searching for Hector Avila in connection to her abduction. The suspect is described as a 28-year-old Hispanic male with brown hair, brown eyes and multiple tattoos on his shoulder. Avila is 4-foot-9, 130 pounds, and was last heard from in Austin.

According to the Hays County Sheriff’s Office, Salcedo also went missing in October 2021 and was suspected to have run away with her unidentified boyfriend. She was found five days later and no further details were released at that time.

If you have any information regarding the abduction, officials ask you call the Austin Police Department at 512-974-6880 or 911. 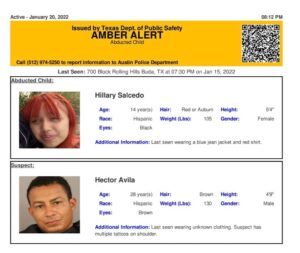 Fire on Morningwood contained, cause under investigation