At approximately 6:45 a.m. on March 5, San Marcos Police responded to the 3300 block of Interstate 35 for a hit and run crash investigation. Upon arrival, officers located Martinez lying near the west access road. 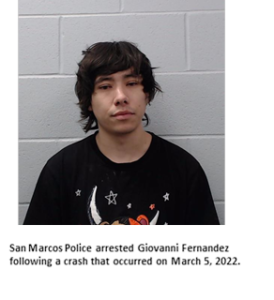 Martinez was pronounced deceased at the scene by Hays County Justice of the Peace Jo Anne Prado.

San Marcos Police collected evidence at the scene and obtained surveillance footage indicating Martinez was struck by Fernandez, who was driving a dark-colored Toyota Camry. Fernandez drove away from the scene after the crash and was later located by San Marcos Police.

Fernandez was booked into the Hays County Jail and faces a charge of Accident Involving Death, a second-degree felony. As of this release, a bond has not been set.

This is the third fatal crash investigated by San Marcos Police in 2022.