A plastic tote covered exposed electrical wires on the floor, bugs and rat feces throughout the clinic and an overall “deteriorating and poor condition” of the health facility itself.

In June 2017, the Department of Labor launched an investigation into the Gary Job Corps Center (GJCC) in San Marcos.

Job Corps is a no-cost education and career technical training program administered by the U.S. Department of Labor that helps young people, ages 16 to 24, improve the quality of their lives through career technical and academic training. It was created in 1964 during President Lyndon B. Johnson’s administration.

Built in 1965, the GJCC in San Marcos is the largest job corps center in the United States.

In May of 2017, a former contracted employee filed a complaint with the department of labor for contract fraud and violations. The complaint was filed under 41 U.S.C. 4705, sections 3.901 through 3.906, which grants whistleblower protections to employees of contractors, subcontractors, grantee or subgrantee or personal services contractor.

An employee of a contractor, subcontractor, grantee, or subgrantee or personal services contractor may not be discharged, demoted, or otherwise discriminated against as a reprisal for disclosing to a person or body described in paragraph (2) information that the employee reasonably believes is evidence of gross mismanagement of a Federal contract or grant, a gross waste of Federal funds, an abuse of authority relating to a Federal contract or grant, a substantial and specific danger to public health or safety, or a violation of law, rule, or regulation related to a Federal contract (including the competition for or negotiation of a contract) or grant.

The complainant reported Gary Job Corps Human Resources and administration had fired him for being a whistleblower on the condition of the center’s dental health clinic.

During an audit, he reported the facility lacked not only the equipment needed but was not up to health and building code standards itself.

The complainant began working for GJCC on July 18, 2016. According to his complaint, he identified “serious deficiencies in the dental diagnostic equipment at the facility.”

The dental clinic at GJCC lacked a Bite-wing x-ray machine, which is used by dentists to diagnose decay and bony pathologies, within 15 days of his employment. The machine also helps with the detection and treatment of root canal therapy, cysts and tumors.

While the clinic did possess a panoramic x-ray machine, it was inoperable for 10 weeks out of the 2 years it had been in operation at the clinic. However, it was not sufficient to diagnosis all of the dental health issues students at Gary Job Corps were experiencing.

The complainant described the clinic lacked sinks for employees to wash their hands before, during and after dental procedures or exams. A plastic tote covered exposed electrical wires on the floor, bugs and rat feces throughout the clinic and an overall “deteriorating and poor condition” of the health facility itself.

Without the equipment, the complainant reported he could not fulfill the requirements of his employment contract with MTC, thus being out of compliance with the Texas Board of Dental Examiners (TSBDE) Licensee Rules and Regulations. The lack of the necessary equipment also made the clinic uncompliant with the center’s Policy and Requirements Handbook 6.10, R2.

According to the complainant, MTC and the Health and Wellness Administrator, Brenda Brooks, ignored requests to purchase the necessary x-ray machine and to correct the additional health and safety issues reported by the complainant.

In January 2017, Gary Job Corps Center was visited by a federal assessor/inspector. The inspector received a report detailing the deficiencies at the center’s health clinic.

After the report was filed, the complainant said he was interrupted in the middle of a dental procedure for a meeting with the Job Corps Center Director, Lonnie Hall, to discuss the complainant’s concerns for the clinic and his patients. Following the 45-minute meeting, he was taken over to HR and officially terminated.

The termination papers were signed and dated two days before the complainant was actually terminated.

“This story is another example of corporate greed and profits taking a front seat to the actual mission of government programs, like Job Corps,” said Brandon Barnes, Fowler Law Firm, P.C., the complainant’s attorney. “Just the same as the private prison epidemic and other instances of public money being squandered or wasted by corporate masters, the same is true with the Job Corps program and MTC’s administration of the Gary Job Corps Center.”

Within 30 days of the complaint’s filing, the DOL informed him that they were launching an investigation with the Department of Labor Office of Investigations (OIG). Within 60-90 days, investigators had already interviewed the complainant and issued subpoenas.

The DOL contracts operations of the job corps center to third-party management companies. Currently, MTC is under contract to manage the facility. In April of 2017, MTC received a one year contract to continue operating GJCC. The solicitation, offer and reward amount was $10.1 million.

Correction: Corridor News has recently received new information to correct or clarify some information. According to the Department of Labor spokesperson, “Contracts may not be for more than a two-year period, with options to renew the agreement on an annual basis, for not more than three additional years.”

However, on October 20, 2017, Adams And Associates, Inc. was awarded the contract to take over operations management of the center. The new contract is a five-year agreement for $14.6 to $43.7 million per year; the DoL has set a minimum budget of $73.2 million and a maximum budget of $218.5 million for the full five years.

The difference in the amount are the options given by the Department of Labor that could be exercised by the contractor. The contract will start on July 1, 2018, and will end on June 30, 2023.

“This is a big deal, but I think the majority of the local community has no clue what Job Corps is, or what goes on out there,” complainant Graham Shea, D.D.S, said. “The people of San Marcos and Hays County might think after reading this article that I am gold digging, and I was angling for the opportunity just as the law changed. Yes…yay for me!!! But that is not the basis of my claim. That basis will always remain the corrupted, unethical actions, and illegality of MTC’s management of the Gary JCC.”

MTC said the company could not comment on the investigation.

Below are all the facilities that MTC manages in Texas per their website.

Over the last year or so, the Job Corps program has been under scrutiny around the United States. Below is a list of articles on issues at other Job Corps centers or lawsuits against MTC and other companies. 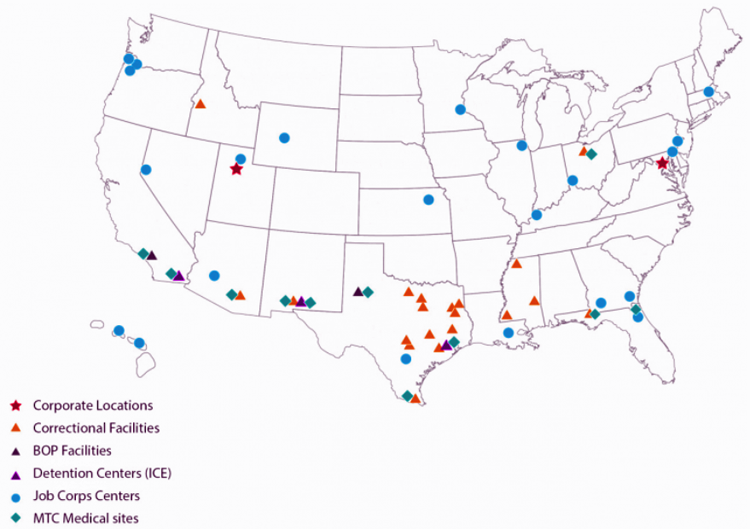