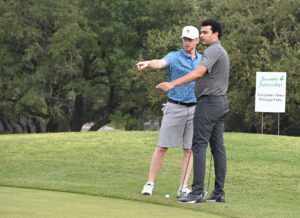 Twenty teams competed for prizes at Quicksand golf course at Woodcreek, just outside Wimberley. Lunch was served during the concluding awards ceremony.

The Rotary Club of San Marcos is nonprofit, nonpolitical and nonreligious. Founded in 1921 , the year celebrates 100 years of service to San Marcos this year.

PEC awards more than $35,000 in grants to local nonprofits