Texas’ recent noteworthy performance in the real estate market highlights the role played by the energy industry and the significance of the relationship between housing and land markets.

Texas is the nation’s top oil and natural gas producer, so oil price fluctuations have a considerable impact on the state’s economy. The 2014 oil bust had widespread negative effects on different sectors and regions of the Texas economy, including real estate markets. Low oil prices impacted home prices as income and employment growth declined. Some oil-sensitive areas—such as Houston, Odessa, and Victoria—registered a significant slowdown in housing demand as can be seen by the resulting increase in months of housing inventory (see table). 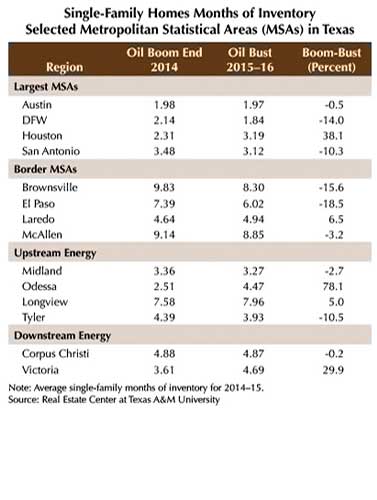 The link between oil prices and real estate market activity is felt in both the short term and long term due to demand and supply factors. Real estate markets as well as land prices are affected by the increase in household disposable income when oil and natural gas prices fall on a persistent basis. Persistent low oil prices are at least mildly positive for most areas as they tend to boost consumption of non-oil-derivative goods and services in the short-run. In Texas, the downside risks are concentrated in regions with a large portion of their employment base in the energy industry.

Texas gains from high oil prices in the long term, as seen after the 2007–08 recession when the state’s housing market outperformed the nation’s. The expanding energy sector led to both employment and income growth. Texas’ recent noteworthy performance in the real estate market highlights the role played by the energy industry and the significance of the relationship between housing and land markets.

Oil prices impact Texas real estate through both supply and demand channels. The supply-side effects relate in no small part to land purchases and land prices. Higher oil prices contribute to an overall expansion of the state’s economy, as buyers compete for land for agriculture, recreation, and development. This affects the availability and price of land for new home construction. In addition, when oil prices rise, investment and employment by the energy sector tends to rise as well, causing an increase in income and an upsurge in housing demand. Labor supply is also affected because some laborers choose to work in the energy industry at higher wages, resulting in fewer workers to build houses and an increase in home construction costs.

Oil price changes produce non-negligible demand-side effects as well. For instance, if oil prices fall, so do gasoline prices and more generally transportation costs, and short-term consumption may increase as a result. Consumers may use a portion of their gas savings to upgrade their living standards, boosting housing demand. However, for Texas’ energy-concentrated regions, the economic benefits of an oil price increase driving employment up far outweigh the short-lived demand drag from higher oil prices.

Oil prices can have a substitution effect on housing demand as well when oil price fluctuations lead to relative energy and transportation cost changes. When this occurs, consumers can choose to buy less expensive goods instead and seek more affordable locations and housing arrangements. This may explain the impact oil prices have above and beyond their effect on discretionary disposable income, even after taking into account the concurrent effects of oil prices coming through the cost of land and long-term interest rates.

Since 1975, pronounced changes in land prices relative to house prices occurred (Figure 1). Both collapsed in the 1980s as oil prices fell. Texas fell into a recession as a result. House and land prices recovered in the early 2000s as oil prices rose and then the concurrent oil boom helped the state weather the 2007–08 financial recession. As oil prices rise and fall, so do land prices, which in turn affect the cost of new home construction. This suggests the importance of land as a key supply-side factor in pushing house prices up. 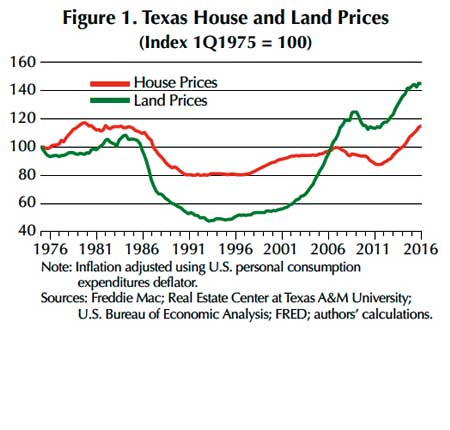 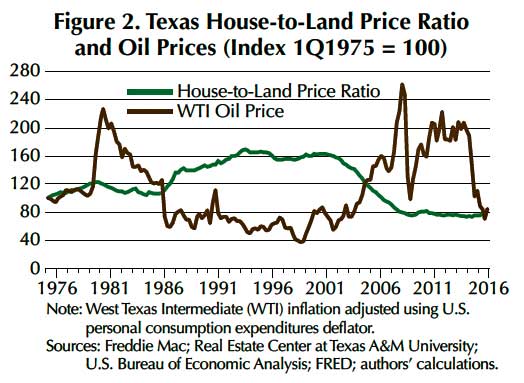 Oil prices spill over to house and land prices through their effects on household disposable income. Other national and global factors, such as long-term interest rates, which affect mortgage and interest rates on commercial loans, alter both the supply of and demand for Texas housing as well. Rising oil prices could lead to increased inflation expectations and cause interest rates to rise. The opposite is true when oil prices fall. 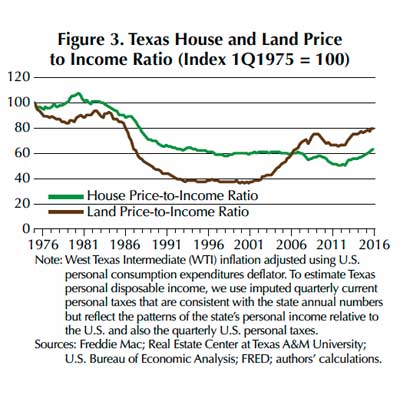 The fall in oil prices in the early 1980s led to a substantial collapse in land prices, but the effect on house prices was somewhat mitigated. Disposable income growth remained fairly stable in the 1980s even as the Texas economy went through two recessions. This caused house price declines that helped lower the house price-to-income ratio.

Before and After Fracking 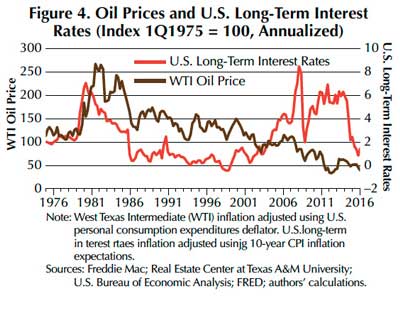 After the 1980’s oil crash, the Texas economy became more diversified. In 2011, fracking technology led to the shale oil boom in the Permian and Eagle Ford. This made Texas an even more significant driver of U.S. oil production because oil production increased from 1.4 million barrels per day in 2011 to 3.2 million barrels per day in 2016. Data shows that technological advancement in the use of oil since the 1970’s has resulted in sustained and sizable energy-efficiency gains. This mitigates the demand-side effects of oil price shocks, potentially making the impact of oil supply shocks due to shale oil excavation more significant for Texas.

Oil prices are an important factor determining the opportunity cost attached to converting rural land for urban development. Oil prices affect land supply availability and land prices. Oil prices also have an influence on disposable income through demand-side effects and their impact on oil production. In Texas, the shale oil boom in the 2000’s appears to have played a major role in shaping the relationship of oil prices to land and house prices.

House prices registered higher growth than income and continued to increase even with the large drop in oil prices in 2014. Housing supply constraints caused by lack of developed lots, tight labor conditions, and limited development loans apparently could be altering the relationship between housing and oil prices. Texas’ lower dependence on the upstream energy industry, as well as those housing supply constraints, seem to have contributed to modify the relationship between housing prices and oil prices as well.

This analysis covers 1Q1975 to 2Q2016. All series are inflation-adjusted using the seasonally adjusted quarterly U.S. personal consumption expenditures deflator from the U.S. Bureau of Economic Analysis—obtained from the St. Louis Fed’s FRED database—and indexed in units to 1Q1975=1.

The real land price indexes were calculated by the Real Estate Center at Texas A&M University. The quarterly nominal rural land price series are expressed in dollars per acre and seasonally adjusted by the Center using a simple four-quarter moving average.

To construct the real long-term interest rate, the nominal long-term rate was used, which is the ten-year Treasury constant maturity rate (yield in percent per annum) from the Board of Governors of the Federal Reserve System (H.15 Selected Interest Rates) obtained through the St. Louis Fed’s FRED database. The daily time series is not seasonally adjusted by the source—the data were converted from daily to quarterly frequency by simple averaging without requiring any seasonal adjustment. The real U.S. long-term interest rate is straightforward to construct based on Fisher’s equation by netting out a consistent survey-based measure of long-term inflation expectations.

The long-term inflation expectations data is the forecast of the annual average rate of headline CPI inflation over the next ten years from the Federal Reserve Bank of Philadelphia’s Survey of Professional Forecasters (SPF) extended with linearly interpolated Blue Chip Economic Indicators survey data prior to 4Q1991 back to 4Q1983 (which is also provided by the Philadelphia Fed’s SPF). We use the monthly FRB/US-model series ZPI10 produced by the Board of Governors transformed to quarterly frequency (by simple averaging) to complete our long-term inflation expectations series back to 1Q1975.

Ms. Grossman (valerie.grossman@dal.frb.org) is web content manager in the Research Department of the Federal Reserve Bank of Dallas; Dr. Martínez-García (enrique.martinez-garcia@dal.frb.org) is a senior research economist and advisor with the Federal Reserve Bank of Dallas; Yongzhi Sun (yongzhis@tamu.edu) is a Texas A&M University Ph.D. graduate student in Economics; and Dr. Torres (ltorres@mays.tamu.edu) is a research economist with the Real Estate Center at Texas A&M University.