SAN MARCOS, TX – Around 7:30 a.m. on Monday, Feb. 22 the San Marcos Fire Department responded to a house fire at 421 Lindsey St. near Texas State University’s campus. All residents were able to evacuate and there were no reported injuries.

The house, referred to by residents as Sinai, is associated with Saint Paul’s Outreach (SPO), a Catholic organization that has 44 households on college campuses nationwide. There were six people displaced by the fire, one missionary and five Texas State students.

Nick Smith, a Finance Major at Texas State University lives in the house next door to where the fire took place and is also associated with SPO. Smith was woken up by the residents of Sinai telling him to put his shoes on and evacuate.

“Two guys from that house came running through the door and told us Sinai house was on fire,” Smith said. “I don’t think anyone in the house really got anything out, a few of them grabbed their phones but they lost birth certificates, passports, car keys… everything.”

Although the cause of the fire is still being investigated by the San Marcos Fire Department, Smith suspects that it was an electrical fire. Due to the winter storm last week, a pipe had burst in the house and caused flooding to the downstairs floor. In an attempt to remove the moisture in the room the residents had three dehumidifiers and two fans plugged into a single power strip.

“They did a good job with a fire this size and the way it progressed before they even got here,” Henderson said. “There were obviously no fire sprinklers in the building and there’s no automatic protection or fire alarm. Based on the photos, whenever they got here it was already rolling pretty good, the attic- I am going to go ahead and say it- was fully ingulfed.” 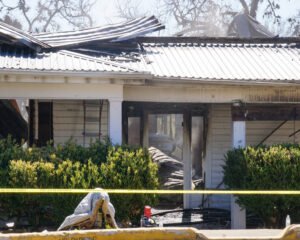 According to Henderson, the severity of the fire caused them to get assistance from the New Braunfels Fire Department, allowing four fire engines to be present on the scene.

Several hours following the initial call smoke was still seen escaping the structure and firefighters were still working on extinguishing hot spots throughout the house.

Nathan Metzinger, the Vice President for Mission at SPO said that although local supporters are housing them temporarily, they are looking for long term solutions. According to Metzinger, SPO’s main focus right now is to support the students impacted by the fire.

“I think it’s less about SPO and more about just taking care of these men, a fire is such a terrible tragedy when it happens,” said Metzinger. “And again, I’m really really thankful that nobody was hurt, but it is very disruptive for these men. So, if there are folks in the community that would like to assist and think they would be able to help they should reach out to Ben.”

If interested in donating to those displaced by the fire, Ben Huntley can be reached at ben.huntley@spo.org.