In September 2017, the San Marcos River Foundation approached city council asking for help in the maintenance and protection of two properties located in the Edwards Aquifer Recharge Zone.

The meeting opened with Mayor John Thomaides announcing Council member Saul Gonzales would be absent due to an emergency at work.

Five public meetings were held to discuss a new transportation plan and thoroughfare plan for the city of San Marcos, the annexation of two tracts of land and the rezoning of properties for a single-family development and a multi-family development.

Council also received a presentation and held a public meeting regarding the Mystic Canyon development.

The development is located near the Castle Forest, Franklin Square and Bishop Crossing neighborhoods, which is currently zoned as Future Development.

During the public comments, residents expressed concerns about potential flooding and runoff. The property is located uphill from established neighborhoods.

Additionally, council members expressed concerns about the property’s environmental sensitivity; the 56.6-acre property is located in the Edward’s Aquifer Recharge Zone. The developer had requested that the property is rezoned as an SF-6 (single family), which would allow for 6000 sq. ft. lots.

According to staff, two neighborhood streets currently dead end at the property, but fire codes will likely require a connection to Ranch Road 12. The developer has the adjacent property under contract in case that is required. There is also a requirement to dedicate parkland or pay a fee.

The property is currently vacant except for a retention pond.

According to Jim Ladner, the developer, the pond was designed to collect runoff for 192 lots, which is more than the proposed development is projecting. The developer is planning on 9000 sq. ft. lots.

City staff said that the development would be subject to Code SMTX standards, which will limit runoff and include additional environmental restrictions, not in previous requirements.

While the application was submitted before Code SMTX passed, staff said Code SMTX would address all of the concerns voiced by council members and residents, and the development would be required to follow them.

Councilmember Lisa Prewitt said she could not support new development on the property even under the current zoning.

Council voted 3-3 to change the zoning with Councilmembers Prewitt, Melissa Derrick and Ed Mihalkanin voting no. The motion died due to lack of majority.

To give the development potential to move forward, Thomaides made a motion to postpone the zoning change until the developer and city staff could discuss the concerns voiced by council members and residents. The vote passed unanimously.

There were 30 other items on Tuesday’s agenda including 20 items on the consent agenda.

With a 6-0 vote, council members also approved with consent agenda an approximate $1,270,000 contract with Enterprise Fleet Management Inc. for the lease of 31 vehicles and the purchase of miscellaneous equipment for maintenance.

Councilmember Hughson requested agenda item 13 was pulled from the agenda so that council could suggest.

Hughson noted that staff had followed directions from city council for the agenda item; however, after further thought, she said she was against changing the Economic Development and Economic Development Fund Policies as it would include the entire fund versus just the $200,000 council had decided to put toward workforce housing.

Agenda Item 13 failed 0-6, and council gave staff direction to bring the topic of creating a separate fund for workforce housing into the next budget discussion.

During the discussion, Councilmember Derrick said she had pulled the wrong agenda item; the resolution passed with a 6-0 vote. 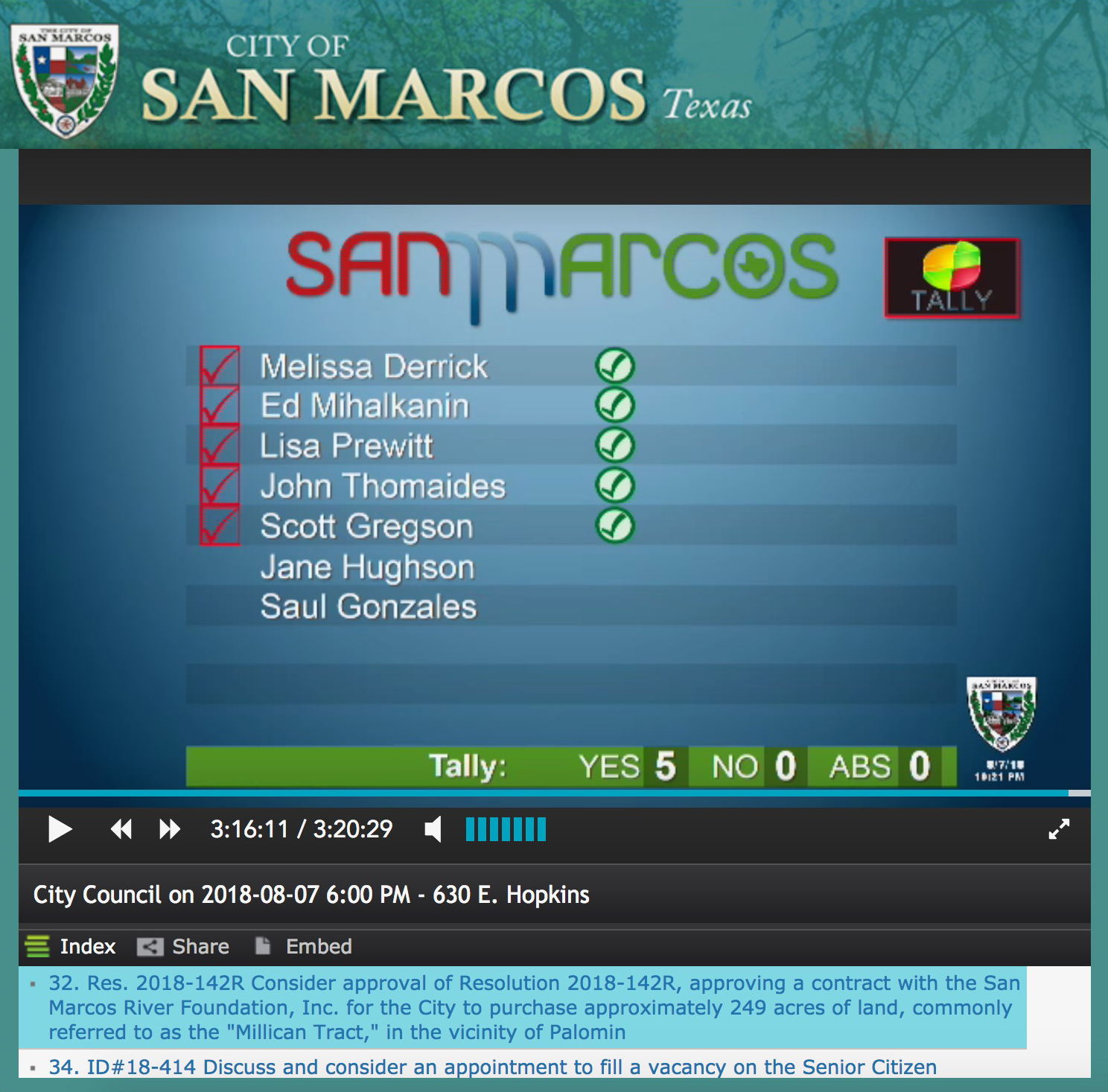 In September 2017, the San Marcos River Foundation approached city council asking for help in the maintenance and protection of two properties located in the Edwards Aquifer Recharge Zone.

According to SMRF, the organization has been working for the last five years to preserve the two ranches as conservation sites.

The Milican Tract and the Greigar Tract, as the two ranches owned by SMRF are being called, were not rated as the highest of priorities for acquisition in Flood Mitigation by city staff.

There was no discussion regarding the topic, and the item passed 5-0. Councilmember Hughson recused herself from the discussion and vote. Hughson owns property in between both the Millican and Geiger tracks (see map below). 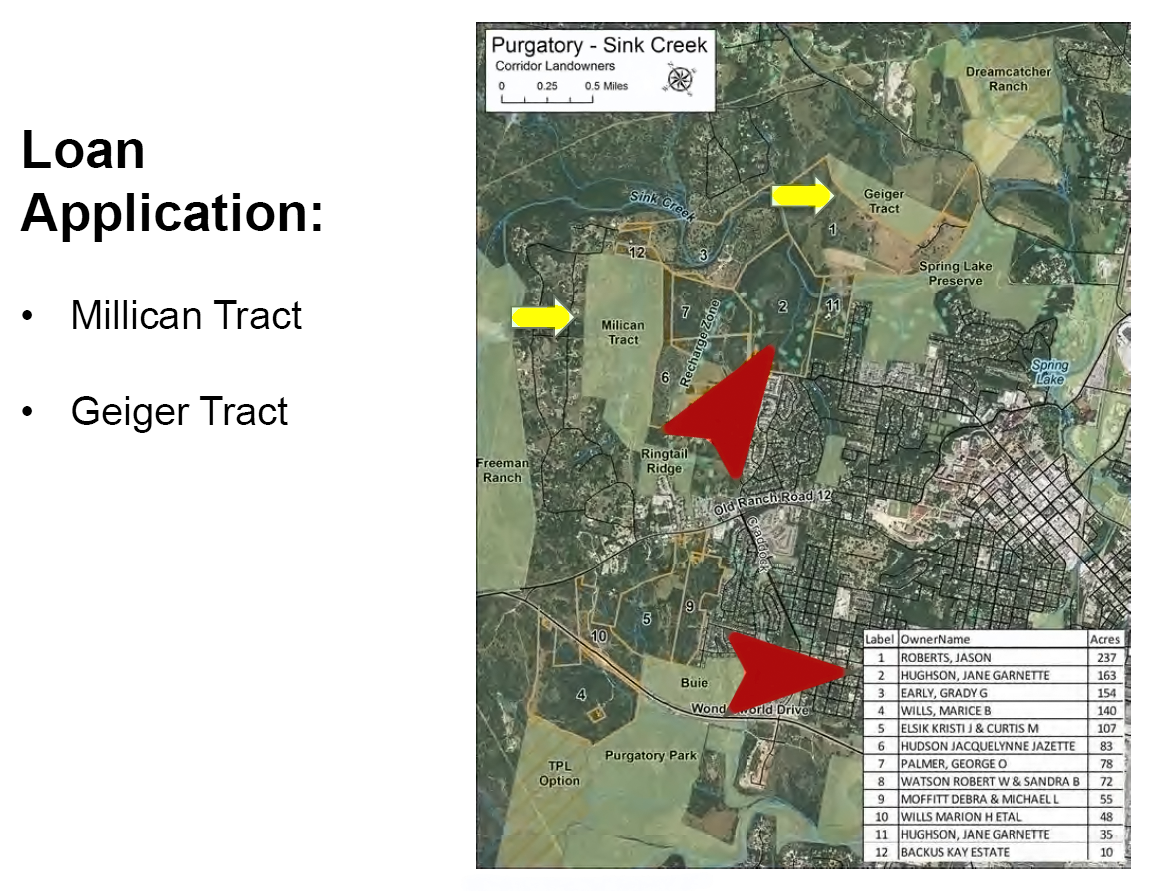 City council’s next regular meeting is August 21 at 6:00 PM.