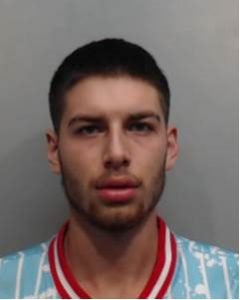 On Sunday, the San Marcos Police Department responded to a report of shots fired at the Palazzo Apartments.

According to police, a male suspect was reported to be chasing after another male suspect; several gunshots were heard.

Officers located the male subject, who was later identified as Dominic Greene, 20. Greene was arrested on charges of unlawful possession of a firearm by a felon, unlawful carrying weapon and deadly contact discharge firearm.

Officers located the second suspect at the Cedars Apartments. Police said he was aggressive and uncooperative with officers; however, he eventually admitted to being the subject Greene was shooting at.

No one was injured during the incidents, and the identity of the second suspect was not released. Greene has been booked in Hays County Jail on a $15,000 and a $10,000 surety bonds. As of Wednesday morning, at 11:05 AM, he had not been released.