On Tuesday, March 31, at approximately 9 PM, the San Marcos Police Department responded to a call for an unconscious driver in a vehicle that was stopped at the intersection of Guadalupe Street and the west access road of IH35. 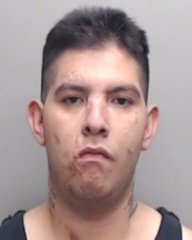 Upon arrival, officers ran the license plate which returned as Derek Arredondo (DOB: 7/22/1987). The single occupant and driver was identified as Arredondo by the prominent scar down his face.

He was unconscious with his foot on the brake. Narcotics and a weapon were observed on the front seat next to Arredondo, and the doors to the vehicle were locked.

Per Interim Police Chief Bob Klett, “Arredondo is a convicted felon who has been involved in multiple violent offenses and is a documented gang member.

Due to his background and the weapon in plain view, the SWAT (Special Weapons and Tactics) team and Hays County Crisis Negotiations Team were activated as a safer option to take him into custody.”

Multiple attempts by the initial responding patrol officers to waken Arredondo using lights, sirens, and bumping the vehicle were unproductive.

Efforts to contact Arredondo via his cell phone by law enforcement and Arredondo’s family were also unsuccessful.

It was then decided to allow SWAT to take Arredondo into custody. During the attempted arrest, the back seat of the vehicle caught fire after a diversionary device was deployed which is an unusual result of using this device.

SWAT operators were able to pull Arredondo out of the vehicle after a violent struggle.

Arredondo sustained burns as he fought to get back into the burning vehicle. He was immediately transported to an area hospital for treatment of his injuries.

EMS and Fire were on the scene very quickly as it is a standard practice to have them staged nearby for incidents such as these.

Arredondo faces warrants for Felon in Possession of Firearm and Unlawful Carry of Weapon. The handgun was recovered at the scene along with ammunition.

Due to the ongoing investigation, no further information can be released at this time and SMPD is not available for interview.