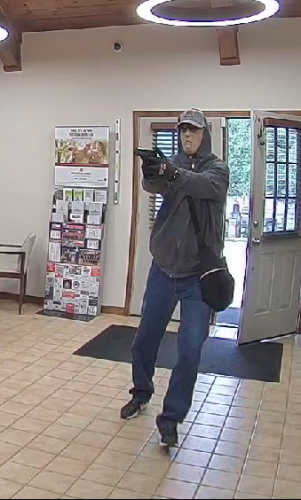 Responding deputies learned that a robbery had occurred. The suspect is described as:

Possibly a White male, wearing a gray hoodie, a flesh-colored mask, blue jeans, wearing a grayish baseball cap with an eight-point star with “Cannon” in blue embroidery, and carrying a black bag. He was also wearing black gloves and was armed with a black handgun with a green stripe on the top of it.

The suspect was last seen running north towards an adjacent field next to the bank. It is believed the suspect fled in a black or dark-colored Jeep SUV that was parked off-site.

There were no customers in the bank and though one of the employees was grabbed, none of the bank employees were injured during the robbery.

The Texas Bankers Foundation has offered a $5,000 reward for information that would lead to the arrest and indictment of the individual who robbed the Broadway Bank branch in Wimberley on June 20.

If you have information regarding this incident, identity of persons, whereabouts, etc., please contact emergency communications at 512-393-7896 or Detective Chase Crow at chase.crow@co.hays.tx.us or 512-393-7814. You can also contact Crime Stoppers anonymously by calling 1-800-324-8477 from anywhere in the U.S. or you can submit your information online to Tip Line: P3tips.com.