The median “wealth” or financial assets of U.S. households that participated in one or more means-tested government programs in 2017 was about 97% less than that of those who didn’t.

Despite less wealth and lower asset ownership, households that received government assistance surprisingly had only slightly lower unsecured debt, such as credit cards and medical bills, than those who didn’t and even lower secured debt like a mortgage.

The Survey of Income and Program Participation (SIPP) is the nation’s premier source of information on the characteristics of those who receive government assistance. The 2017 SIPP data show the disparities in levels of wealth and debt  – the value of assets owned minus the liabilities (debts).

The U.S. Census Bureau report and detailed tables on household wealth in 2017 show wide variations across demographic and socio-economic groups.

Even when excluding home equity, program participants had less wealth ($1,835) than nonparticipants ($74,530).

Households can participate in multiple programs at a time. Eligibility criteria for these government programs vary but are generally tied to income and sometimes include asset limits.

Here’s a deeper look at wealth and debt holdings of program participants, both overall and by program.

Net Worth of Program Participants

The overall financial picture of households that did not participate in any of the six government programs listed above is markedly different from those that did.

The median net worth, including home equity, of nonparticipants, was $181,800 — about 31 times more than the $5,797 of households that reported participating in one or more of these programs.

WIC recipients were a particularly vulnerable group. WIC only benefits pregnant women, mothers of infants, infants, and children under five. Eligibility is benchmarked to income and a participant’s nutritional risk.

The assets and wealth of WIC recipients were substantially lower: a median net worth of only $3,244, which is 32 times less than the national median. In contrast, households where the youngest child was under 5 years of age (regardless of any program participation) had a median net worth of $38,420.

About 54% of WIC recipient households had a net worth below $5,000 and 36% had a zero or negative net worth. Their median checking account balance was only $500. 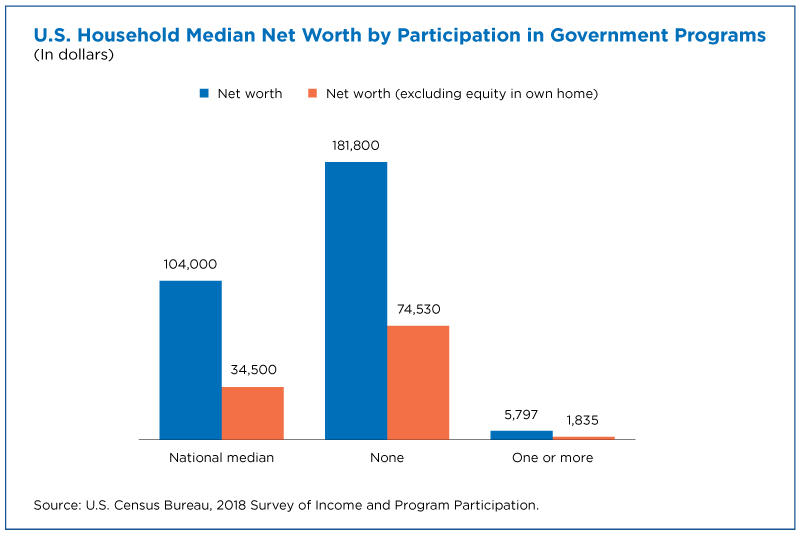 What Assets Do Households With Program Participants Have?

Households that participated in one or more government programs also had lower rates of asset ownership than those that did not receive assistance. 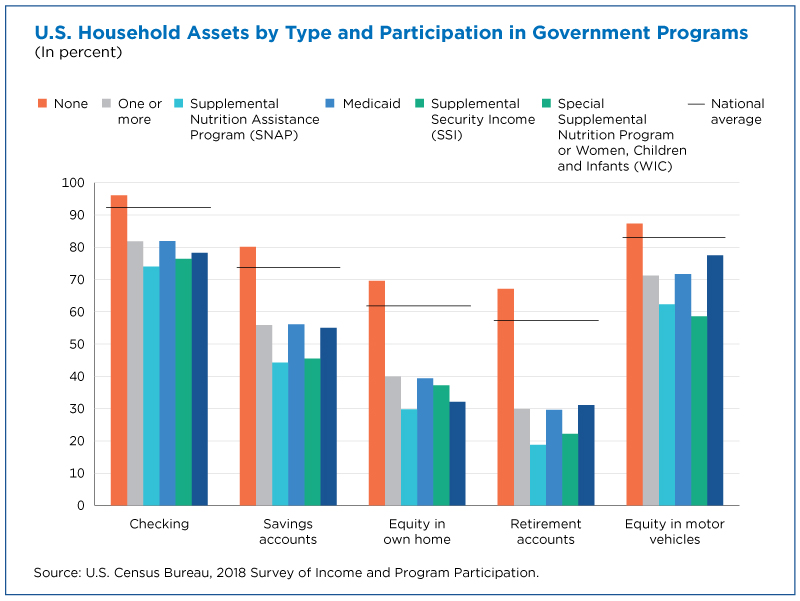 Here are ownership rates of the five most commonly held assets for program participants and nonparticipants:

Program participants not only had lower levels of asset ownership but the value of the assets was much lower.

How Much Debt Do Program Participants Have?

Despite lower measures of wealth and asset ownership among program participants, their levels of unsecured debt surprisingly were only slightly lower than of those who didn’t receive government assistance.

Those receiving government assistance were more likely to have medical debt but had slightly lower rates of credit card debt. Rates of student loan debt were equal between those with and without government benefits (22%) and the median student debt value was lower among participants.

Secured debt levels — “secured” by an asset such as a home or vehicle — of program participants were lower.

That suggests that those who, despite their lower asset levels, were able to buy a home or a car might buy older or more modest options which results in lower debt and asset values. 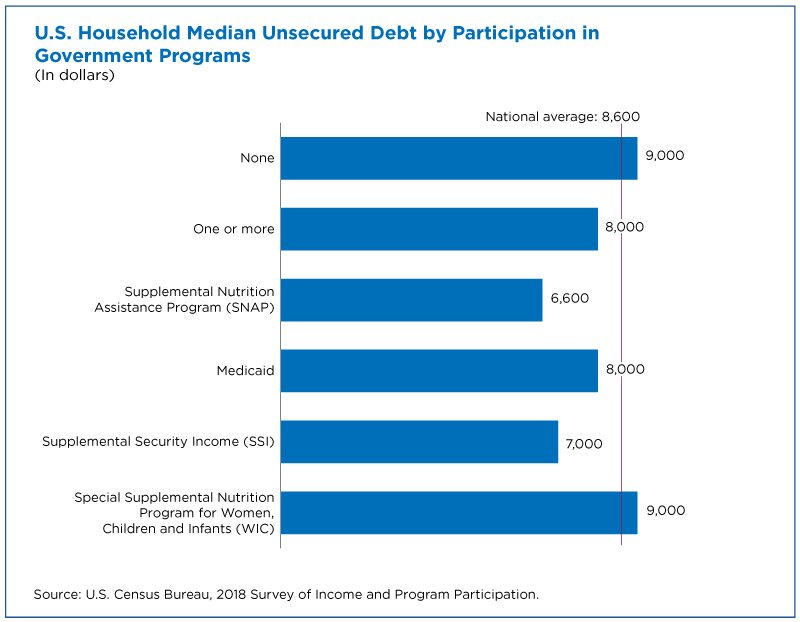 Donald Hays is a survey statistician in the Census Bureau’s Social, Economic, and Housing Statistics Division.

Gov. Greg Abbott vetoes funding for Texas Legislature and its staff as punishment for Democrats’ walkout on elections bill