Local police declared a riot on July 25, a Saturday evening after rioters once again tried to burn down a federal courthouse and launched mortars and fireworks at police officers, several of whom sustained injuries.

Similarly, destructive unrest has unfolded each night in the city for weeks now, with rampant vandalism, arson, graffiti, and more becoming commonplace as protests over the death of George Floyd morphed into riots over President Trump’s controversial decision to send federal officers to Portland.

Yet Portland is by no means the only city gripped by unrest and violence.

Antifa extremists in the US graffiti in many languages because the riots serve as media propaganda and inspiration to far-left extremists internationally. These photos were taken in Portland and Seattle.

US Attorney announcement of Portland rioter arrest has photos of one night’s riots inside police building. https://t.co/YnykeBUkws pic.twitter.com/0RWtyJU18q

Breaking: Edward Thomas Schinzing, 32, has been charged by federal authorities for allegedly setting fire to the Justice Center on 29 May on the first night of antifa/BLM rioting in Portland. He was allegedly filmed being part of the mob who stormed the building. #PortlandRiots pic.twitter.com/CzAkdREJz4

Riots have also rocked cities such as Austin, Texas, and Seattle, Washington. In Seattle over the weekend rioters reportedly set fires, vandalized businesses, smashed car windows, and assaulted a court building. NPR reports that 21 police officers were injured while trying to contain the chaos.

And this is just the most recent wave. In May and early June, rioting broke out in cities from Minneapolis, Minnesota to Dallas, Texas.

We’re witnessing a breakdown in the rule of law. In many cases, city officials have enabled or encouraged rioting while law enforcement stands down and allows wanton property destruction. Portland Mayor Ted Wheeler even joined rioters and participated in the same demonstrations that were spiraling out of control.

Portland mayor @tedwheeler is escorted to safety by his security team. Angry protesters follow and try to assault him despite his support on the front lines of the riot. They try to go inside the building but is pushed back by Wheeler’s security. pic.twitter.com/xUydADlJEv

Meanwhile, Seattle Mayor Jenny Durkin encouraged and lauded the self-described anarchists who declared an “autonomous zone” in the middle of the city. The mayor called the no-go zone a “block party” amid a “summer of love” despite rampant destruction and seizure of property.

Only after weeks of skyrocketing crime rates and multiple shootings (including one that killed a teenager) did she finally order law enforcement to clear the city’s insurrectionists.

And in many of the other protests-turned-riots around the country, law enforcement stood down and watched as private property was destroyed and their city was rocked by rioters.

So how can anyone justify this madness?

Well, many left-wing journalists, activists, and commentators who are politically sympathetic to the rioters have argued that rampant destruction isn’t really a problem, because it’s “just” destruction of property, not violence against people.

One person who makes this argument is Oakland-based “racial justice organizer” Cat Brooks, who was interviewed by the New York Times.

“I don’t consider property destruction violence,” Brooks said in defense of the rioting and vandalism in her city. “Violence is when you attack a person or another living, breathing creature on this planet. Windows don’t cry and they can’t die.”

“I don’t consider property destruction violence. Violence is when you attack a person or another living, breathing creature on this planet. Windows don’t cry and they can’t die.” – @CatsCommentary https://t.co/eIj4rb7MRh

Meanwhile, New York Times writer Hannah Nicole-Jones, founder of the controversial “1619 Project,” has also defended the destruction of property and argued that it doesn’t constitute violence.

“Violence is when an agent of the state kneels on a man’s neck until all of the life is leached out of his body,” she said. “Destroying property, which can be replaced, is not violence. To use the same language to describe those two things is not moral.”

“Violence is when an agent of the state kneels on a man’s neck until all of the life is leached out of his body. Destroying property, which can be replaced, is not violence. To use the same language to describe those two things is not moral” –@nhannahjones on CBSN pic.twitter.com/GGteXRFwAr

An op-ed published in the Times titled “What kind of society values property over black life?” made a similar point. Several other left-wing media outlets have also promoted this argument.

For example, one recent article in The Nation headlined “In Defense of Destroying Property” drew viral attention for openly arguing in defense of vandalism.

“People are not objects; broken windows and burnt cars are simply not commensurate with the violence of state-sanctioned murder,” wrote Columbia University Ph.D. R.H. Lossin. “Plateglass windows don’t bleed. They don’t die and leave loved ones grieving. They don’t contribute to the collective trauma and terror experienced by their communities. They just break, and then, at some point, they are replaced by identical sheets of glass.”

“Disavowing property destruction and even theft because of a spurious attachment to a reified notion of nonviolence is a mistake,” Lossin concluded.

If you want to understand why America is getting more violent, listen to this Oberlin prof.

She cooly advocates violent protests because, as she explains, violence works.

She never mentions what will happen once the other side adopts the same tactic.

A similar piece in the left-wing journal Current Affairs likewise argued that “Destroying property is not in and of itself a violent act.”

“The word ‘violence’ should be reserved for harm done to people,” editor Nathan J. Robinson wrote. “Otherwise, we risk making the term conceptually incoherent and—much more importantly—conflating acts that do very serious physical harm to people with acts that have not physically harmed anyone.”

It is, of course, true that a rioter smashing a window is not morally equivalent to a police officer standing on an innocent man’s throat, but this is a strawman argument. (No serious person ever suggested otherwise). Moreover, these arguments rely on a false distinction between grave acts of vandalism and violence.

In reality, destruction of property does real harm to innocent people. And if allowed to continue, the collapse of rule of law that started with property destruction begets a cycle of lawlessness that will inevitably descend into bloodshed. Indeed, it has already.

As famed Austrian economist, Ludwig Von Mises put it, “It is in the nature of every application of violence that it tends toward a transgression of the limit within which it is tolerated and viewed as legitimate.”

Not convinced yet? Just consider the sad news reports detailing how police officers found the remains of a burned body in a Minneapolis pawnshop that was torched during riots as demonstrators cheered. Vandals may have thought what they were doing was “just property damage”—in reality, it was murder.

Sadly, this isn’t a one-off example. During the riots in the wake of Floyd’s death, at least 15 people were killed. How? What started as merely “broken windows” and “torched cars” escalated into mass violence that left police officers, private security guards, and peaceful protesters dead.

“Fifteen people have died since the protests, riots and looting began, including a former police captain, an officer of the DHS and a peaceful protester who was just trying to get home. Like Floyd, many of them are minorities themselves.”https://t.co/sZq8e0P9T2

It’s simply impossible to keep a collapse of the rule of law constrained to “just property damage.” Moreover, it is deeply immoral and intellectually bankrupt to suggest that property destruction does not constitute “harm done to people.” Vandalism is also itself a violent act that violates human rights.

And remember, it wasn’t just big corporations or CEOs whose properties were destroyed in these riots. Many of the post-Floyd riots destroyed minority-owned small businesses.

Former firefighter KB Balla used his life savings to open a sports bar in Minneapolis. With the grand opening initially delayed by COVID-19 shutdowns, his dream was left in tatters after rioters looted, vandalized, and destroyed the property.

Something tells me Balla—and the thousands like him whose livelihoods were destroyed in riots—wouldn’t accept the naive argument that property crime doesn’t hurt anyone. 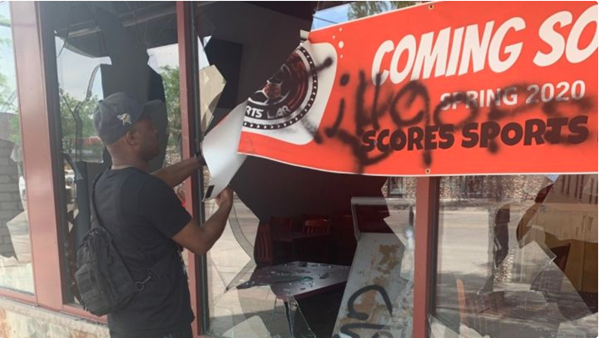 It’s not just the owners of the property themselves who are impacted by wanton vandalism. Consider the way one African American woman broke down on camera while asked about the destruction in her community.

“They went straight to OfficeMax, the Dollar Store, and every store over here that I go to,” she said through tears. “I have nowhere to go now. I have no way to get [to other stores] because the buses aren’t running.”

Riveting television just now. A disabled woman crying while saying Floyd’s death tragic, but he’s in “better place than I am.” The rioters are “stupid and ignorant.” Destroyed local dollar store and others where she shops. With Metro Transit shutdown she can’t go anywhere. @kstp pic.twitter.com/TOJ3TNiv2S

The economic and emotional costs imposed by the destruction of property are borne by real people—and the reason why is quite clear. Influenced by the work of John Locke, economist Murray Rothbard explained why property rights are human rights:

Much is heard these days of the distinction between human rights and property rights, and many who claim to champion the one turn with scorn upon any defender of the other. They fail to see that property rights, far from being in conflict, are in fact the most basic of all human rights.

The human right of every man to his own life implies the right to find and transform resources: to produce that which sustains and advances life. That product is a man’s property. That is why prop­erty rights are foremost among human rights and why any loss of one endangers the others. (Emphasis mine) Murray Rothbard

What Rothbard meant was that lives depend on livelihoods—and livelihoods depend on property. Property is necessary for life itself and for survival. A mother cannot feed her child without property rights that protect her income. An entrepreneur and father cannot shield his children from homelessness if his business is torched to the ground.

The open assault on property taking place in cities across the country is clearly a campaign of violence. After all, a standard dictionary definition of violence is “behavior involving physical force intended to hurt, damage, or kill someone or something.” That’s right, not just “someone,” but “something” too.

That’s not just some technicality: it’s what people generally mean when they use the word “violence.” The term has long encompassed things like burning someone’s house down. Leftist commentators are basically trying to redefine “violence” as a synonym of “assault.”

Why the word games? It could very well be for political ends. After all, much of the hard left is heavily influenced by Marxism. And one of the tenets of Marxism is the rejection of private property rights in favor of communal (in practice, state-) ownership of the means of production.

By excluding the seizure and destruction of private property from the meaning of “violence,” they are able to smuggle a key Marxist presumption into our very language.

This is an ominous path. The track record of Marxism is a litany of tyranny, famine, and murder, precisely because of its hostility toward private property.

Property rights are human rights, and we discard them at our own peril.

Brad Polumbo is a libertarian-conservative journalist and the Eugene S. Thorpe Writing Fellow at the Foundation for Economic Education.

Letter to the Editor: South Texans decry inaction at border