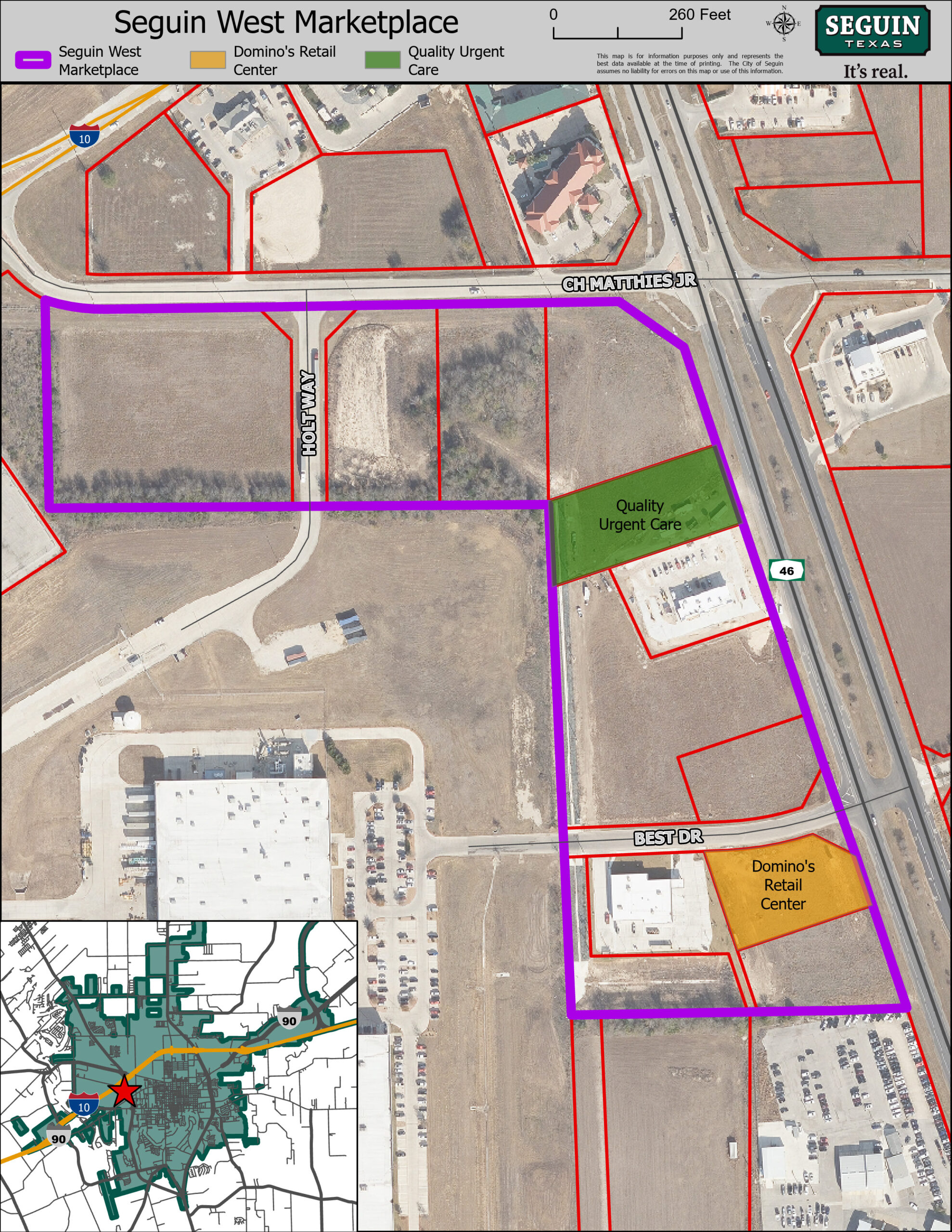 The Seguin West Marketplace is home to several new retail developments such as DaVita, Burger King, Chicken Express. These new projects are a sign of continued growth in Seguin’s retail market. Rapid growth in the City of Seguin continues to fuel interest in new projects and investment opportunities by both developers and national retailers.

Mueller Ventures is developing the first project, a 7,650 square foot retail center being built on a 1.47-acre tract fronting State Highway 46, immediately to the north of Burger King. Quality Urgent Care will anchor the development and occupy 4,150 square feet. The remaining 3,500 square feet is divisible and available for lease with the endcap space offering drive-thru capabilities.

Alan Murph, Franchise Owner for Domino’s Pizza in Seguin is developing the second project, a 7,800 square foot retail center being built on a 1.17-acre tract located at the southwest corner of State Highway 46 and Best Drive. Mr. Murph will be relocating his existing Domino’s store located at 1007 S. Austin Street to the new retail center.

Domino’s Pizza will anchor the new retail center and will occupy 1,800 square feet. Pre-leasing for the remaining 6,100 square feet is currently underway. Construction on this retail center is expected to be completed in the summer of 2022.

“For over 30-years, Domino’s has been a proud member of the Seguin business community.” Said Alan Murph, Seguin Franchise Owner for Domino’s Pizza. “I’ve had the privilege to own the Seguin franchise since 1993 and have seen the City grow leaps and bounds since then. Our new location on State Highway 46 will position us for long-term success in Seguin. The new location will provide better access to all the new homes and businesses that are booming in Seguin, while at the same time helping the Seguin economy grow by delivering new leasable retail space to the market. I’m very excited to play a part in the growth of Seguin.”

“With all the growth that we are experiencing in the City and throughout the surrounding area, the demand for new retail space along the 46 Corridor in Seguin is in high demand. The development of these two new retail centers will create opportunities for new retailers to enter the Seguin market. This will help expand and diversify the retail options that the citizens of Seguin can access without having to leave the trade area, ensuring the continued growth of our tax base”, said Josh Schneuker, Director of Economic Development for the City of Seguin.

Residential development in Seguin is growing at a record pace. More than 20 new residential subdivisions are currently under construction within the City Limits. In addition, the City of Seguin has issued nearly 2,000 residential building permits over the past two years.

Given the current pace of residential growth that the City is currently experiencing, City Officials anticipate that Seguin’s population could double over the next 10 years. The City’s booming residential activity, paired with the new jobs being created across the region help make Seguin a prime location for retailers looking to grow and expand.

Seguin’s Retail Trade Area Population is more than 120,000 and serves as the retail hub for portions of Guadalupe, Gonzales, and Wilson Counties. Seguin remains to be one of the only major retail stops between San Antonio and Houston on the Interstate 10 corridor.

San Marcos schedules public hearing for use of CDBG funds