The Bobcats are looking to find momentum after a disappointing loss against the University of Incarnate Word.

“We can’t go out like we did this last weekend and make mistakes because [Eastern Michigan] will capitalize on them,” Head Coach Jake Spavital said.

The Bobcats expect the Eagles to run the ball and be physical.

Eastern Michigan has dominated the offensive side of the ball early on in the season. The Eagle’s top rusher is Jawson Hamilton who has 6 yards per carry and is averaging a total of 93 yards per game.

The Eagles’ offense has 10 returning starters and some depth at the quarterback level. So far this season, senior quarterback Ben Bryant’s passing average is 62.1%. Texas State’s team’s defensive leaders are Troy Lefeged Jr. with 23 tackles and Isiah Nixon with two sacks.

The Bobcats defense will need to be on high alert and play aggressively and consistently while working to avoid mistakes against a consistent passing team.

This week, the Bobcats have 24 players out. Coach Spavital said junior wide receiver Waydale Jones needs surgery to repair a fractured foot and will be out “for a little bit.” However, Jones has the same type of injury Revels had last year. Revels said that the recovery process took several weeks.

Spavital also says that junior linebacker London Harris was hospitalized with an infection in his arm and lost 30 pounds. Although he’s back at practice and will travel to the game, they are working to get his weight back up.

With the return of 11 starters, Eastern Michigan puts up an average defense. The Eagles gave up 34 points to the University of Wisconsin, a Big Ten school, two weeks ago.

Texas State sophomore quarterback Brady McBride’s passing percentage is 56.3%. He is going to have to improve to keep the Bobcats in the game.

The top offensive rusher for the Bobcats is freshman running back Calvin Hill, who has rushed 181 yards this season. The Bobcats top receiver is Marcell Barbee who has received 177 yards this season and caught three touchdowns. Barbee and McBride appear to have a good quarterback-receiver connection which is what the Bobcats will need on the field Saturday.

The game will be broadcasted on ESPN+. 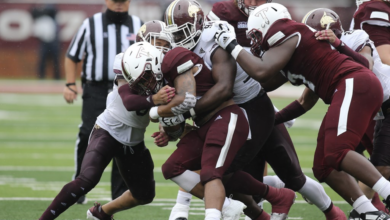 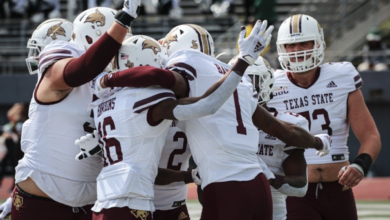