According to officials, the ceremony was a small family affair due to COVID-19 precautions.

Chief Standridge’s wife, Beth, pinned his badge for him. Bob Klett, who served as Interim Police Chief, will resume his position of Assistant Police Chief.

“Chief Standridge rose to the top of a very competitive and highly qualified field of applicants,” said City Manager Bert Lumbreras.  “It’s clear that our community wants a leader who understands our demographics and is adept at serving every single resident in a cohesive and thoughtful manner.  Chief Standridge has the proven ability to be a community leader, and he’s the right person to lead our men and women in blue into the future.” 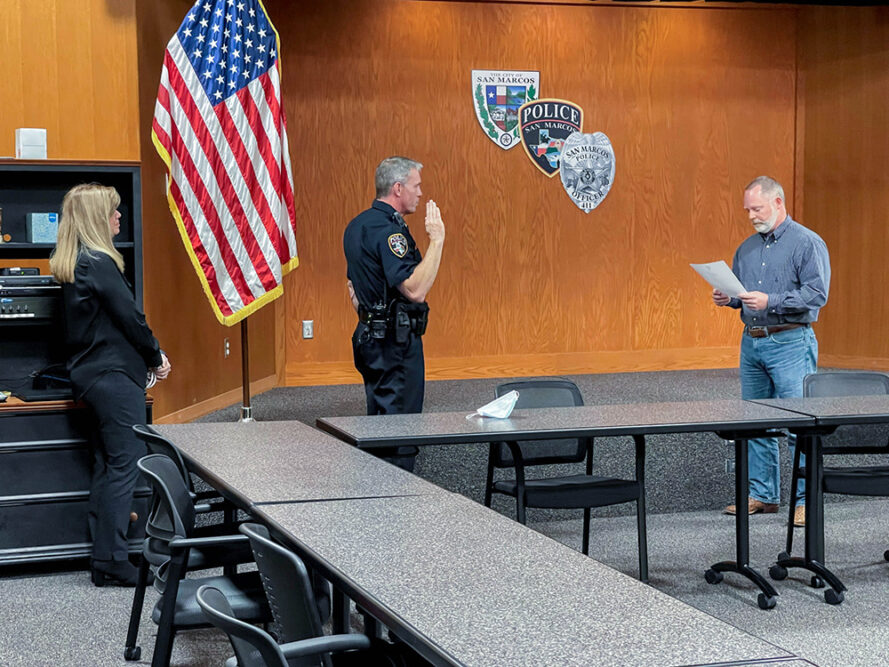 Chief Standridge has served more than 25 years with the Abilene Police Department, the last eleven as the Chief of Police.

He currently serves as the President of the Texas Police Chiefs Association (TPCA), an organization that seeks to promote the professional practice of law enforcement and advocates for the highest standards of ethical conduct among today’s peace officers.

Standridge has a Master of Public Administration degree from Sam Houston State University and is a graduate of the FBI National Academy.

Standridge is the recipient of numerous awards, including 20 Under 40 Business Leader, Executive Leadership Award, I-CAN Hero, and the TPCA’s Innovation Award.

He has chaired the State’s Officer Safety Committee and worked with his team to create VINCIBLE–a statewide program that works to reduce police officer line of duty deaths and injuries in Texas–which is used by more than 1,500 police agencies, including the San Marcos Police Department.