Corridor News originally published this article on Thursday, March 31. The article was removed out of an abundance of caution after receiving a call from a SMCISD representative. The names of the Mendez Elementary School Principal and other SMCISD staff have been removed at the request of the district. Corridor News has reviewed the article and we are standing by our story.

On February 28, a fifth-grade student from Mendez Elementary school came home anxious after receiving a threat with a knife from another fifth-grader.

Afterward, the SMCISD Superintendent’s Secretary, commented “OMG. It was a little pocket knife” on Facebook. 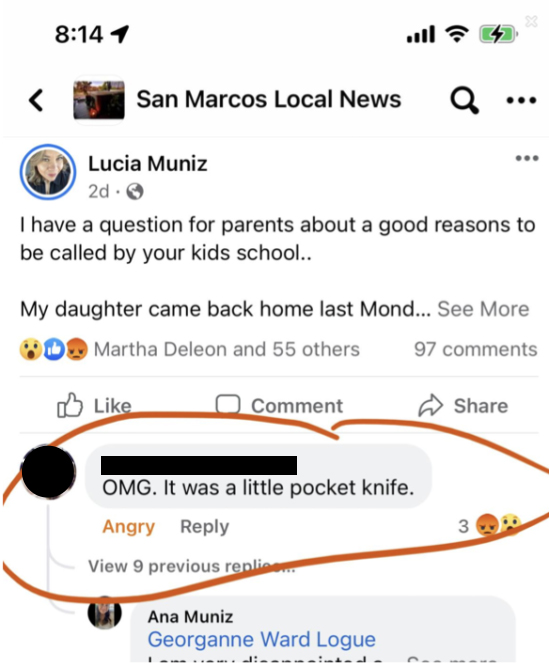 According to a written statement by Lucia Muniz, her child and the child’s friends went to the counselor’s to inform them of the incident, where they were told to “write a statement on a piece of paper about what had occurred.”

Muniz went to the office to contact the principal of Mendez Elementary school, as to why she was not informed on March 1. The principal was unavailable and the parent was referred to a Mendez school counselor. Muniz expressed concern about her child’s safety and lack of communication from the school.

The counselor was unable to answer Muniz’s questions and advised the parent to wait for the principal.

The following day, March 2, Muniz met with the principal where she was assured that the “situation was under control,” and that “she [the principal] had called her [Muniz] the day of the incident.”

“When I asked her why I wasn’t notified she assured [me] that she had called me the day of the incident. [The principal] told me I was the only parent that they couldn’t reach,” Muniz stated.

“I usually get an email, call or text from the school with any matters. However, I did not receive a call, email, or text,” Muniz wrote. 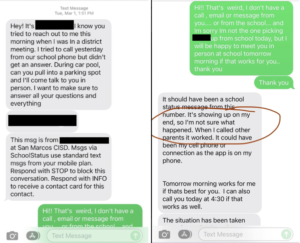 The principal said that the call was showing on her end and the app was probably lacking. She also told Muniz that her phone did not give her an option to leave a voicemail.

Muniz requested call records of the school status to check if there was a call made. After asking the principal what her plan was going to be for her child’s safety, Muniz was told the student would be suspended for a couple of days and upon the child’s return, the principal would keep the child in her office for supervision.

She also told the parent that the student would be eating lunch in her office and would not be allowed to go to a classroom or playground for one week.

On March 3, Muniz’s child notified her that the child who made the threat was back at school and got close to the child and the child’s friend and said he hoped that they were “bulletproof.”

Muniz went back to Mendez Elementary School on March 4, to speak to the principal about the new threat but was told she was not on campus and was referred to two of the schools’ counselors. After a conversation with both counselors, the Muniz’s questions remained unanswered and the parent was advised to wait for the principal again.

“[The principal] reached out to me that same day by text message,” Muniz wrote.

“She asked me to not reach [out] to other parents about the situation as she ‘already had it under control.’ I no longer trusted her, as she was lying to me from the beginning,” Muniz said.

Afterward, Muniz reported the principal to the SMCISD Central Office where the Director of Student Support Services and Family Engagement contacted her to set up a meeting with her and the principal on March 7.

“We talked about my child’s safety concerns and was told they were taking care of the situation and things were under control,” Muniz said.

“I was told by [the Director of Student Support Services and Family Engagement] that legally, the school does not have to call me as the calls are ‘courtesy calls,’” Muniz wrote.

According to Muniz, the principal reassured her that she would take good care of her child as if the child were her own.

“When I asked them what their plans were for students’ safety, I was told that it was ‘confidential,’” she wrote. Muniz wrote that she was told the best solution for her child was to sign a Stay Away form, which would be ready for the child to sign on March 8.

After reading the form, Muniz decided to go back to the school because she was not comfortable with her child signing anything without her being present.

She met with the principal again on March 8 to discuss the Stay Away form where she was questioned why she did not want her child to sign the form.

“I explained to her my reasoning. She [the principal] became agitated and argumentative with me. [The principal] questioned my parenting and involvement as I am not part of the PTO (Parent-Teacher-Organization),” Muniz wrote.

Muniz said the principal became short-tempered with her and offered her the option to transfer her child to a different school.

“She said, ‘I can transfer her now to any school that you want, it will be easy for me to do that now and I will get it approved right away,’” Muniz wrote.

According to Muniz, the principal insisted three times about the transfer, and she did not find her actions and language appropriate, thus she declined.

“She [the principal] said, ‘Why do you want [your child] to stay here? I am the boss here. I am the one in charge of the school. If you don’t trust me, you have the option to leave,’” Muniz wrote.

“I am deeply disappointed with the district and staff members as I now know I am not the only parent with safety concerns. I spoke with a parent whose daughter was also threatened by the same student. She was notified of the incident right away,” Muniz said. She now believes there is racial discrimination involved as the student threatening her child is white, and her child is Hispanic.

“I truly hope that I get the opportunity to meet the superintendent and come together to find the best solution,” Muniz said.

Muniz said her child came home from school last week, March 21, and told her about another incident that had occurred with the same student. Her child told her that the student brought the knife to school and threatened her again. Muniz said one of her child’s friends defended them and again she was not notified.

“Many parents have contacted me after my post on Facebook with many incidents and concerns,” Muniz said.  One of the incidents included second graders vaping and other students eating edibles at the school.

According to Muniz, other parents have also called the school about the incident with her child and the knife because they saw her Facebook post. Muniz said the principal was telling them that it was not a knife and that Muniz and her child are lying.

Muniz said the same student threatened another student at school with the same knife and the parent was notified that same day.

“The student so happens to be white, therefore racial discrimination is involved,” Muniz said.

Muniz said that her child now tells her that the principal and counselors treat her differently. She said the counselors and principal greet all students but her child and make faces at them. If they see Muniz or her child they roll their eyes.

According to the SMCISD’s Chief of Communications Andrew Fernandez, a grievance has been filed by the parent.

“We will not comment any further to avoid interrupting the grievance process,” Fernandez said.

Muniz said she met with central office for a hearing March 25 and will hear back in ten days.

“I have yet to receive a response from Mr. Cardona questioning the staff’s behavior,” Muniz said.

This is a developing story, San Marcos Corridor News will provide updates as they are made available.