Texas State scored on its first two offensive possessions for the first time this year when Seth Keller kicked a pair of 42-yard field goals to give the Bobcats an early 6-0 lead.

However, Georgia State countered with an 18-yard touchdown run up the middle by Jamyest Williams, and Noel Ruiz added the extra point for a 7-6 lead.

The Panthers extended their lead to 14-6 when Darren Granger threw a 35-yard touchdown pass to Jamari Thrash, and Ruiz added the extra point on the first play in the second quarter.

The Bobcats came back to score a touchdown and pull within 14-13 when Brady McBride scrambled eight yards up the middle of the field into the end zone, and Keller added the extra point with 9:46 left in the first half. McBride accumulated 69 yards on the touchdown drive, completing three-of-four passes for 34 yards and scrambling three times for 25 yards.

Georgia State extended its lead to 21-13 when Williams ran up the middle 28 yards for his second touchdown, and Ruiz kicked the extra point midway in the third quarter.

The Bobcats added three points when Keller kicked a 31-yard field goal with 3:57 left in the third quarter.

The Panthers closed out the scoring when Darren Grainger hit tight end Aubry Payne down the left seam for a 27-yard touchdown pass, and Ruiz kicked the extra point with 14:54 left to play.

The Bobcats had two opportunities to score in the fourth quarter when they drove down inside Georgia State territory. However, they were thwarted both times.

The first possession ended a third-and-15 play at the Panther’s 34-yard line, McBride’s desperation pass was intercepted at the three-yard line.

After Ruiz missed a 41-yard field goal attempt for the Panthers, Texas State drove down to Georgia State’s 12-yard line when McBride completed two passes to Ashtyn Hawkins for 42 yards, one pass for eight yards to Rontavius Groves, and scrambled for 17 more yards. However, Georgia State’s Shamar McCollum knocked the ball out of his hands, and the Panthers recovered at GSU’s 12-yard line with 59 seconds left to play.

McBride completed 27-of-47 passes for 255 yards and rushed for a team-leading 46 yards and a touchdown on 17 carries.

Grainger completed 16-of-25 passes for 200 yards and two touchdowns for Georgia State.

Tucker Gregg rushed for 115 yards on 21 carries, while Grainger ran for 106 yards on 14 attempts. Williams finished with 77 yards and the two TDs on eight rushes.

Dixon had five receptions for 65 yards and the other TD.

Texas State travels to Lafayette, La. next Saturday for a Sun Belt Conference game at Louisiana. ESPNU will televise the game that kicks off at 11 a.m. 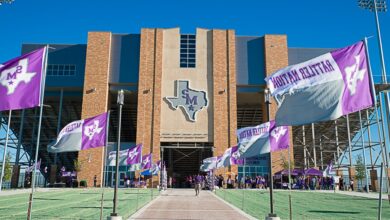