That’s the highest median U.S. household income since the bureau began recording it. But the COVID-19 pandemic affected who responded, potentially biasing the estimate upward.

So, was household income last year really the highest on record?

With or without the adjustment, income in 2019 was significantly higher than in all years shown and for every year since the data was collected.

However, even before the pandemic, making comparisons to years prior to 2017 required caution, since recent estimates reflect changes implemented to the survey.

That means some of the differences over time could be due to these recent survey improvements.

To understand differences in estimates related to the questionnaire change, the 2014 CPS ASEC used a split panel design that asked both traditional and redesigned income questions (see Appendix D of the 2014 Income and Poverty report for estimates).

The table below shows the percentage difference in median household income for each change. The new questionnaire led to a 3.17% increase in median income, while the impact of the new processing system was not statistically significant.
.

What happens when changes are not taken into account?

Without adjusting for these changes, median household income was higher in 2019 than in any year since 1967, the first year the data are available.
.

How They Make Comparisons Adjusted for Changes

One way to compare pre-improvement estimates to current data is by adjusting them up or down by the percentage difference of each improvement, as shown in the table below.

With or without the adjustment, income in 2019 was significantly higher than in all years shown and for every year since the data was collected.
.

How Did the Pandemic Impact Data Collection?

Given data-collection challenges during the pandemic, officials are concerned about bias in the 2019 estimate. So they had to ask how much income would have had to grow from 2018 for 2019 to lead to the highest ever income?

The Census Bureau is currently researching the full impact of the pandemic and has tested various methods for adjusting for this bias (see the working paper). 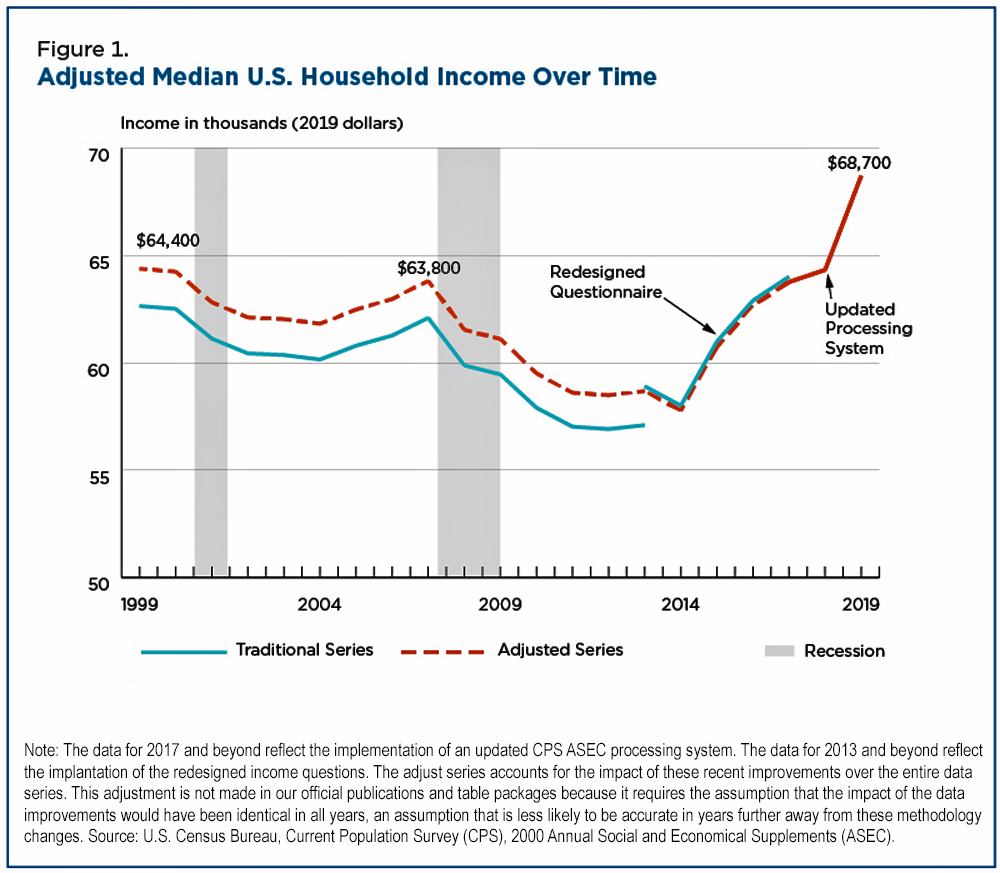