Court Appointed Special Advocates of Central Texas swore in its latest class of volunteers via Zoom on Wednesday, April 8.

Volunteers will be assigned to children who have been removed from their homes because of abuse and neglect and are now placed in the state’s care.

As advocates, the volunteers will get to know everyone in the children’s lives and speak up for them in court, advocating for their best interest. 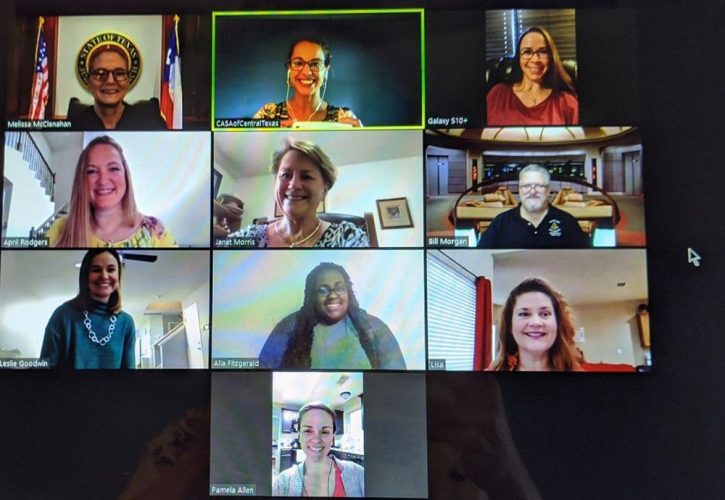 There are more opportunities on the horizon for people to become involved. CASA is enrolling now for the upcoming volunteer training session, and more volunteers are needed for the program to keep up with the number of child abuse victims in the area.

CASA of Central Texas Executive Director Norma Blackwell said now is the time to get involved, as child abuse incidents are expected to rise while residents are remaining in their homes.

“I am thinking of children who are at home, with no escape. They cannot go to a friend’s house for a break from the abuse. They do not get to go to school and see their teachers who have become their safe adults. The abuse is being hidden in their home, and maybe worse due to the stress and change that we are all facing right now,” Blackwell said.

Training sessions will be held Wednesdays, May 13 through June 10, from 1 to 5 PM using the video conference tool Zoom or in the New Braunfels CASA office, depending on conditions at that time.

CASA of Central Texas advocates for abused and neglected children in the community by recruiting, training and supporting community volunteers.

CASA volunteers are appointed to children who are confirmed victims of abuse or neglect to independently investigate the case and provide recommendations to the family court judge, what is in the best interest of the child. They often serve as the only consistent adult in the child’s life.

In 2019, CASA of Central Texas served 587 children in Caldwell, Comal, Guadalupe and Hays Counties but there were an estimated 560 or more additional children who did not have the voice of a CASA volunteer.

CASA is also hosting information sessions online. To learn more and to submit a volunteer application, visit www.casacentex.org. The application deadline for the May 13 training session is April 27.