San Marcos Corridor News is back to bring you the Corridor Weekly News Recap, videos covering the biggest stories in Hays County every week. I’m Sierra Martin, Managing Editor of Corridor News, let’s dive into the news for the week of April 25th from the Innovation Corridor.

??San Marcos Police are investigating a crash that occurred just before 5 p.m. on Friday, April 29, at the intersection of Aquarena Springs Drive and Charles Austin Drive. The accident resulted in the death of 16-year-old Addison Harley and the hospitalization of his 17-year-old pregnant girlfriend.

Initial reports indicate a black Dodge Charger, occupied by Harley and his girlfriend, was traveling at high speed westbound on Aquarena Springs Drive when it struck the back of a Texas State University bus that was stopped at a red light waiting to turn left onto Charles Austin Drive. Upon impact, the Charger spun and struck a Mustang also waiting at the red light.

Harley and his girlfriend were transported to Seton Hays Hospital in Kyle with severe injuries. Harley has died from his injuries, and an autopsy has been ordered. Harley’s girlfriend and her baby survived the accident after surgery, and she was released from the hospital.

Trey Lee, Stepfather of Harley, said that his son had a seizure in the moments leading up to the accident.

A Kyle woman has been sentenced to life in prison without the possibility of parole. On Friday, May 6, Dazrine Chagoya-Williams was charged for her alleged role in the death of her two-year-old son in 2018.

The trial evidence presented over the last two weeks showed that on July 4, 2018, Chagoya-Williams called 911, claiming that her 20-month-old son, Mason Williams, was discovered not breathing after a nap. Kyle Fire Department and EMS attempted to perform life-saving measures on Mason, and soon noticed bruising and other evidence that the death had occurred hours earlier.

27-year-old Stevie Dwayne Williams, Mason’s father and Chagoya-Williams husband, was found guilty to capital murder for his involvement in his son’s death in October 2021. Stevie was sentenced to life in prison without the possibility of parole.

On April 27, the Hays County Sheriff’s Office became aware of an investigation regarding inappropriate communication between Dripping Springs Independent School District (DSISD) middle school students and a teacher. The teacher was identified as 30-year-old Kevin James McLean, who was charged with Sale, Distribution, or Display of Harmful Materials to a Minor and Distribution of a Controlled Substance to a Minor.

According to the district, on April 27, DSISD placed McLean on leave and immediately removed his access to DSISD campuses and students related to alleged improper social media posts.

On February 28, a fifth-grade student from Mendez Elementary School came home anxious after receiving a threat with a knife from another fifth-grader. The concerned parent, Lucia Muniz-Rodriguez, filed for a Level 1 dispute resolution conference on March 25 after feeling the school mishandled the threat. The district responded in a letter to Muniz-Rodriguez on March 31.

Muniz-Rodriguez said she was unhappy with the district’s response and is moving to file a grievance Level 2.

The Falls on the San Marcos River at Rio Vista Park will be open for use beginning on Saturday, May 7, 2022. The Falls were closed for repair in October of 2021. Most of the fencing will be removed from the area except for the work staging area and portions of the sidewalk that will be repaired in the coming week.

Maintenance included repairing voids, undercutting, and deepening the foundation toe of the bank and instream structures. A protective layer of rock armoring around the foundation was also installed. The maintenance strategy will provide a more robust system of protection against river currents and future floods.

An open records request offers additional information into a shooting that occurred on April 10, 2021, resulting in the death of Rescue Eram after being shot by San Marcos Police Department (SMPD) officers.

According to the Hays County Criminal District Attorney’s Report, Officer Jordan Perkins and Sergeant Jayson Cormier both fired handguns at Eram, while Officer Mueller attempted to use a taser to stop Eram’s assault. Officer Perkins shot Eram four times, assuming Eram had a knife, however, officers later determined the weapon was a screwdriver.

These burglaries took place from February 6, 2022, through April 30, 2022, and targeted established businesses that left cash in minimally secured containers, on premises overnight.

The old Hays County Jail, a two-story limestone brick structure that is located on Fredericksburg Street, will soon begin the restoration process.

The restoration is being taken underway by the Hays County Historical Commission. Over the years various ideas have been presented for what the old jail should be used for, including turning it into a thrift store or a law enforcement museum.

More than 4,400 candidates for bachelor’s, master’s and doctoral degrees are expected to cross the stage during eight commencement ceremonies May 12-14 at Texas State University.

All commencement ceremonies will be held in Strahan Arena at the University Events Center.

The City of San Marcos hasl kicked off Music on the Square, a free family-friendly concert series. Free concerts will be held every Friday in May on the lawn of the Hays County Historic Courthouse.

Thank you for tuning in to the Corridor Weekly News Recap, sponsored by La Cima. 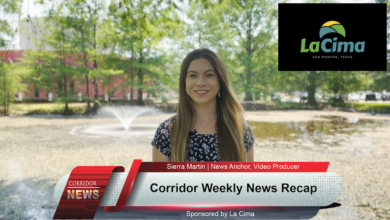 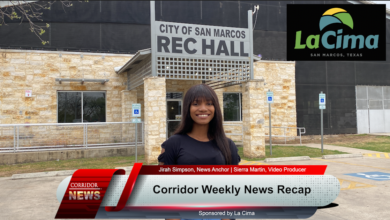