A Hays County resident has filed a civil lawsuit against Hays County Judge Ruben Becerra petitioning for his removal from office with the District Courts.

According to case documents, the grounds for Becerra’s removal stems from “his failure to faithfully execute the duties of the Office of Hays County Judge,” and further “preserve, protect and defend the constitution and laws of the United States and of his State.”

The suit alleges Becerra has accepted at least $50,000 in consecutive years (2019 and 2020) from taxpayers for work and services he did not provide.

In the State of Texas under the Texas Government Code Section 26.006, a “County Judge is entitled to an annual salary supplement from the state in an amount equal to 18 percent of the state base salary paid to a district judge as set by the General Appropriations Act in accordance with Section 659.012(a) if at least 40 percent of the functions that the judge performs are judicial functions.”

To receive the stipend, the law requires a county judge to file an affidavit stating that at least 40 percent, at least two days per week, of the functions he or she performs are judicial functions.

Last week, new documents in the case were released; the documents are the signed affidavits submitted to the Texas Comptroller’s Office by Becerra, which can be viewed below. 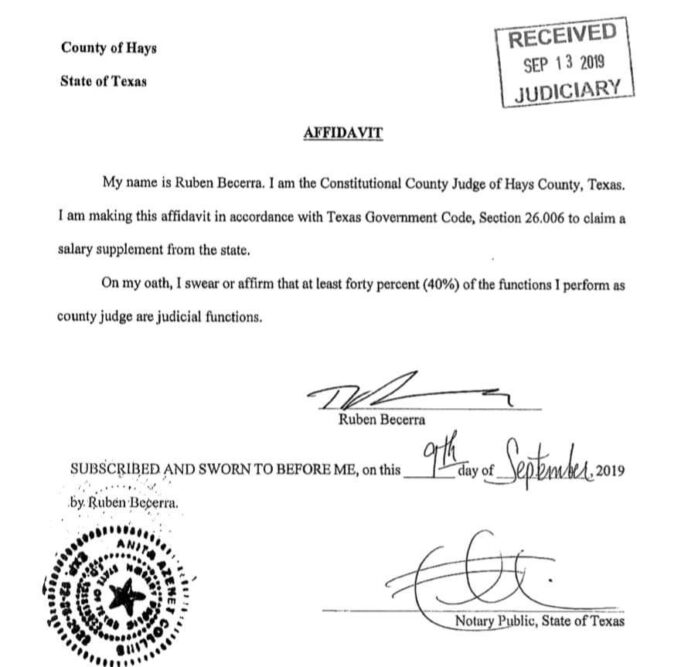 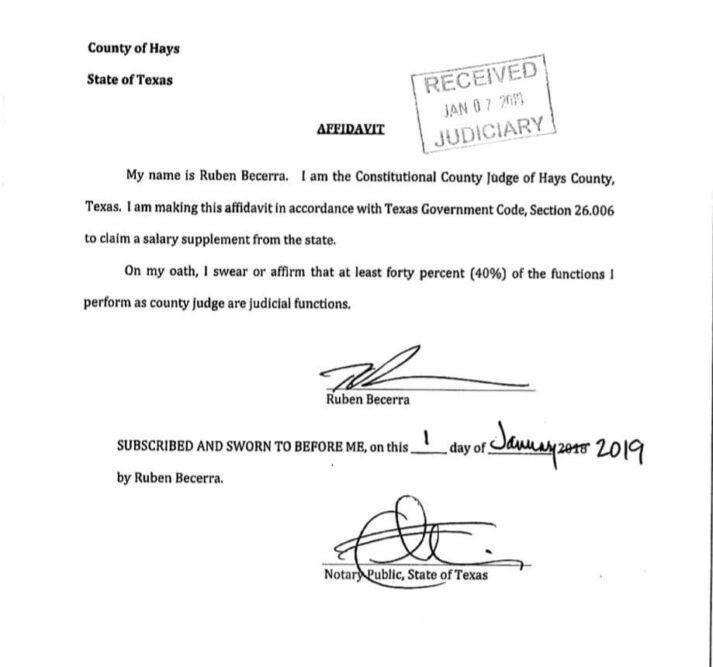 According to an opinion issued in 2016 from the Texas Attorney General’s Office, a judicial function of a county judge is “exercising criminal or civil jurisdiction as authorized by Chapter 26 of the Government Code.”

A descriptive summary of the Texas Court System issued by the State of Texas establishes a county judge has the following jurisdictions:

The lawsuit alleges Becerra “has never done any of these things or performed any of these judicial functions” since taking office in Jan. 2019.

An official response from Hays County’s Office of Legal Counsel regarding a public information request shows no records or documentation to show evidence of Becerra performing judicial duties.

Over the last two years, Hays County has added new positions to help cover judicial jurisdictions, including the addition of a Criminal Associate Judge that magistrates all criminal defendants.

The lawsuit alleges Becerra knowingly performed criminal misconduct through the violation of:

(c) Tex. Penal Code §37.09: Making a record or document with knowledge of its falsity and with intent to affect the course or outcome of an official proceeding;

According to Chapter 87, an officer may be removed for incompetency, official misconduct, or intoxication on or off duty caused by drinking an alcoholic beverage.

The plaintiff is requesting the court immediately suspend Becerra from his position as Hays County Judge and appoint another person to perform his duties until the end of his term.

According to Chapter 87, official misconduct means “intentional, unlawful behavior relating to official duties by an officer entrusted with the administration of justice or the execution of the law. The term includes an intentional or corrupt failure, refusal, or neglect of an officer to perform a duty imposed on the officer by law.”

The filing also states that the plaintiff seeks “non-monetary relief.”

The suit was filed with the Hays County District Clerk’s office on Sept. 14 by The Wymore Law Firm and Brian Bishop Law Firm, both of Austin, on behalf of Hays County resident, Nathan Kaspar.

Corridor News has reached out to Wymore Law Firm and Brian Bishop Law Firm and Hays County Judge Becerra’s legal representation for a statement. This article will be updated when and if a response is received.

Corridor News also reached out to Judge Becerra’s legal representation for a statement and did not receive a response.

“This is a fast-evolving story, and it will be updated as new information becomes available.”