Income, Poverty and Health Insurance Coverage in the United States: 2016

The U.S. Census Bureau announced today that real median household income increased by 3.2 percent between 2015 and 2016, while the official poverty rate decreased 0.8 percentage points. At the same time, the percentage of people without health insurance coverage decreased.

The nation’s official poverty rate in 2016 was 12.7 percent, with 40.6 million people in poverty, 2.5 million fewer than in 2015. The 0.8 percentage point decrease from 2015 to 2016 represents the second consecutive annual decline in poverty. The 2016 poverty rate is not statistically different from the 2007 rate (12.5 percent), the year before the most recent recession.

Another Census Bureau report, The Supplemental Poverty Measure: 2016, was also released today. The supplemental poverty rate in 2016 was 13.9 percent, a decrease from 14.5 percent in 2015. With support from the Bureau of Labor Statistics, the Supplemental Poverty Measure shows a different way of measuring poverty in the United States and serves as an additional indicator of economic well-being. The Census Bureau has published poverty estimates using the supplemental poverty measure annually since 2011.

The Current Population Survey, sponsored jointly by the Census Bureau and Bureau of Labor Statistics, is conducted every month and is the primary source of labor force statistics for the U.S. population; it is used to calculate the monthly unemployment rate estimates. Supplements are added in most months; the Annual Social and Economic Supplement questionnaire is designed to give annual, national estimates of income, poverty and health insurance numbers and rates. The most recent Annual Social and Economic Supplement was conducted nationwide and collected information about income and health insurance coverage during the 2016 calendar year.

The Current Population Survey-based income and poverty report includes comparisons with the previous year and historical tables in the report contain statistics back to 1959. The health insurance report is based on both the Current Population Survey and the American Community Survey. State and local income, poverty and health insurance estimates will be released Thursday, Sept. 14, from the American Community Survey.

Shared households are defined as households that include at least one “additional” adult, a person age 18 or older, who is not the householder, spouse or cohabiting partner of the householder. Adults ages 18 to 24 who are enrolled in school are not counted as additional adults. 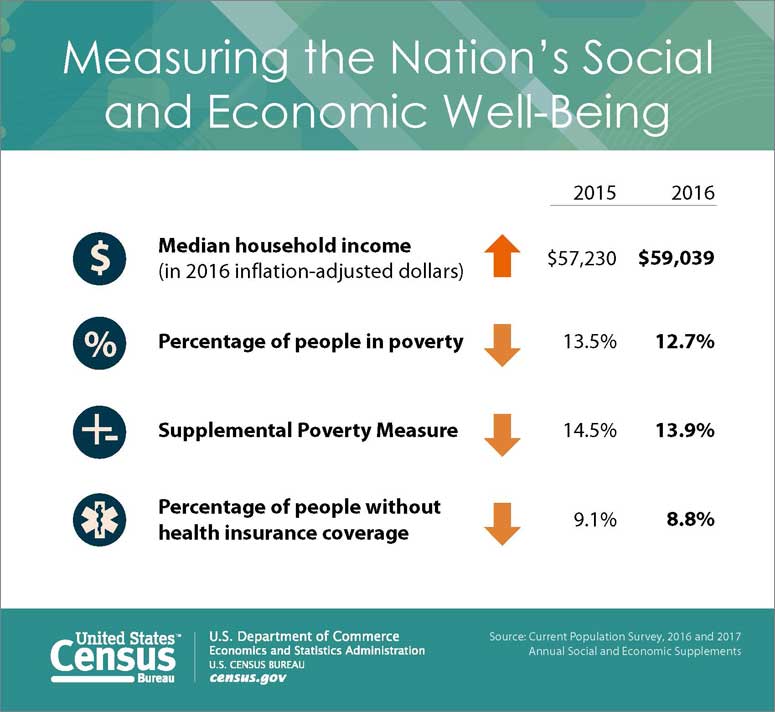 The Current Population Survey Annual Social and Economic Supplement is subject to sampling and nonsampling errors. All comparisons made in the report have been tested and found to be statistically significant at the 90 percent confidence level, unless otherwise noted.

For additional information on the source of the data and accuracy of the Income, Poverty and Health Insurance estimates, visit <https://www2.census.gov/library/publications/2017/demo/p60-259sa.pdf>.