Hays County Commissioners had a lengthy discussion on Tuesday about the use of county funds or county grant contributions for materials or items with a seal or logo other than the official Hays County Seal.

According to Marisol Villarreal-Alonzo, Hays County Auditor, an invoice and a proof was submitted to the auditor’s office for payment regarding materials containing a personal Hays County Judge Seal instead of the official Hays County Seal.

“It was brought to my attention that the countywide operations credit card was utilized to print some materials related to the census that had what we would call a personal seal,” Villarreal-Alonzo said. “In addition, my office received an invoice for some shirts for the census coordinator, and in the invoice, it stated the Judge’s seal.”

Villarreal-Alonzo said since the effort is countywide, the auditor’s office reached out to the department head who maintains the credit card and confirmed that the t-shirts had the Hays County seal; however, the official U.S. Census Bureau poster in question did not. 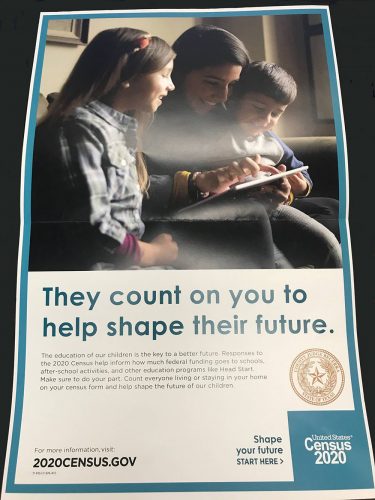 The Auditor’s Office has requested the vendor correct the invoice for the t-shirts before the county pays it.

The discussion was brought to the court by the County Auditor’s request to provide their office with direction on how to proceed with payment of the $278 invoice for document printing services.

According to the U.S. Census Bureau, the printed material in question was a poster and is governed by their policies of the #2020Census media materials for quality, the Census logo placement, where partner logos are to be placed, and other design features.

According to Villarreal-Alonzo, by the time the credit card comes to her office, the purchase has been made by individual departments.

“My office, before issuing a purchasing order for a seal, should be requesting the proof,” Villarreal-Alonzo said. “So, we began to look at invoices and determined that some invoices did not have the attached proof.”

According to Villarreal-Alonzo, grant funds are considered county funds once accepted into the county budget, and the county is required to follow state laws and county policy regarding expenditures of those funds.

“One concern that I have is that nowhere on this document does it say Hays County,” Commissioner Walt Smith said regarding the census materials. “Whether it was grant funds or not, whenever the grant was made, it was made to Hays County.”

Smith said his greatest concern was that the seal used on the document was the same one that has been used in parades and things as “a political logo.”

“I don’t feel comfortable in any way with the county paying for that logo to appear on things at taxpayer expense,” Smith said. “If the county is going to pay for something, it needs to say Hays County on it.”

Hays County Judge Ruben Becerra said, he wasn’t clear when he instructed Anita “to be sure to place our seal” on the documents and didn’t differentiate the county seal from his own, which is how the issue occurred.

Several departments and offices within the county have seals or badges containing their names, such as the Hays County Sheriff’s and Constables’ Offices.

However, Villarreal-Alonzo noted the badges used by county law enforcement offices do include the words “Hays County.”

Smith suggested county offices should be required to send the county auditor’s office proof of any materials bearing a seal before any purchase is made.

According to Villarreal-Alonzo, the auditor’s office has already set a standard regarding payment of materials with a personal seal on it with the judge’s office.

Villarreal-Alonzo said the first assistant auditor spoke with the judge’s office previously regarding a personal seal when it was used for a wall hanging.

Commissioners shared a general consensus that the county should not cover the $278 for the census count program materials that were printed with the judge’s personal seal, and the money would come from personal funds.

Commissioner Lon Shell said he didn’t mind the personal department seals or shields as long as it included Hays County and had been vetted by the auditor’s office.

“Just to end this, I will pay the $278; I do not believe the county should pay for it. So…we won’t pay for it, but it will get paid,” said Commissioner Shell.

Smith said he would bring back a general discussion regarding individual department seals and shields at a future meeting.