HAYS COUNTY — Two candidates running for Hays County Judge in the upcoming primary election are currently in a legal battle. The lawsuits emerged over allegations of spreading slanderous rumors and an altercation that occurred during a Martin Luther King Jr. memorial celebration in downtown San Marcos last month. 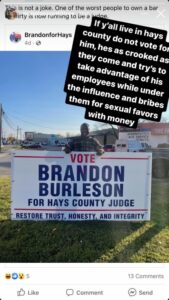 On Jan. 16, 2022, Hays County Judge Ruben Becerra, who is running for re-election, and Brandon Burleson had two family members engage in a verbal argument that has led to a petition for a temporary restraining order.

According to court documents, in December 2021, Burleson became aware that Jon Oliver accused Burleson of being a “pedophile” and drugging and raping 14-year-old boys in Austin. The lawsuit states that Oliver offered the “fabricated allegations” to Monica and Ruben Becerra in “a misguided attempt to discredit” Burleson. 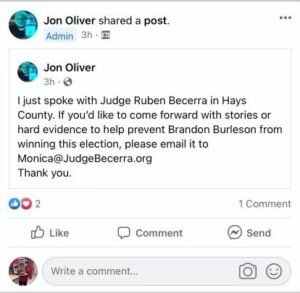 Court documents state that the defendants (Ruben and Monica Becerra, Oliver and Lee) published these statements by oral and written communication. And that the defamatory statements constitute slander per se in that they accuse Burleson of criminal conduct, injure his reputation, and expose him to “public hatred, contempt, or ridicule.”

Burleson is the CEO and founder of Skyline Entertainment and Party Bus Co. In 2016, Texas State University Freshman Jordin Taylor was found deceased beneath a bus from his company after being dragged several hundred feet.

Lee said in a Facebook post that Burleson is still involved in a lawsuit involving the case with his insurance company, and awaiting trial for multiple Driving While Intoxicated (DWI) convictions.

The Taylor family then pursued a lawsuit against Skyline Entertainment and Burleson SMTX Properties LLC. The Guadeloupe County Sheriff’s Office ruled the death as accidental with intoxication not being ruled out as a contributing factor.

“There is no evidence that Jordin was struck by any vehicle, to include the bus itself. Jordan’s injuries were consistent with being dragged under the bus, not being struck by it,” the Guadeloupe County Sheriff’s Office said in a supplemental report. 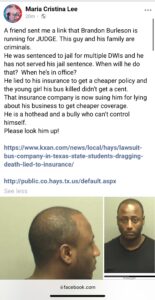 The Burleson campaign provided a public statement and supporting documents regarding being released from the lawsuit from the Taylor family on their website. Burleson maintains that he is not currently being sued by his insurance company.

In 2015, Burleson was booked in the Hays County Jail for a DWI and according to court documents from Hays County, the case is still pending.

At a public gathering at the Hays County Courthouse for MLK Day, court documents state that Ruben Becerra’s wife, Monica Becerra, “began yelling, screaming, and cursing” at Rose Kirk Brooks, Burlseon’s 88-year-old grandmother. Monica Becerra called Brooks an “old ass bitch” and was “only a few inches” from Brook’s face without a mask.

Brooks has petitioned the court for a Temporary Restraining Order against Monica Becerra for senior abuse and filed a civil lawsuit for causing “severe emotional distress.”

Court documents state that Monica Becerra knowingly sought to humiliate and verbally abuse Brooks and the action was unprovoked. The lawsuit says that Brook’s has suffered from extreme emotional distress that has caused headaches, lack of sleep, loss of weight, and fear of leaving her home due to the altercation.

Becerra released a public statement regarding the altercation between his wife and opponent on Saturday, Jan. 16, 2022.

“It is very disappointing when we must resort to violence instead of rational political discourse. Physically attacking and threatening to kill one’s family is a line I will never cross,” said Becerra. “The matter is in the hands of the justice system, and I trust that they will investigate and adjudicate the matter fairly.”

Becerra said that due to his position in the county and the ongoing investigation, he would not be making any further comment about the incident. 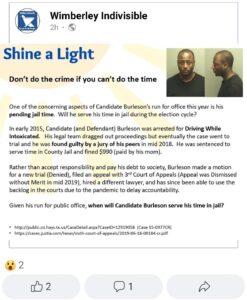 The Burleson campaign issued a statement in response to Becerra’s press release.

“I will not address lies and a failed attempt to distract from the issues the citizens of Hays County want to hear about,” said Burleson. “I am available and willing to talk to anyone about any issues and concerns that relate directly to Hays County or myself as a candidate.”

The court proceedings for these lawsuits have not yet taken place. San Marcos Corridor News will provide updates as they are made available.

UPDATE: This article was updated to include additional information regarding public statements by the Burleson Campaign.